Alan Frost DL has been made an honorary doctor of business administration by Bournemouth University... 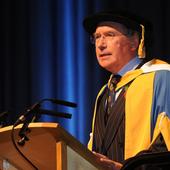 Dr Frost (pictured) was recognised for the contribution he has made to the life and development of the university, particularly as chairman of the University Board from 2004 to 2010.

An experienced former financial services chief executive with expertise in change management, Dr Frost also served as Visiting Fellow in the University's European Centre for Corporate Governance. Since 2010 he has been a Deputy Lieutenant of Dorset, and is currently High Sheriff.

In presenting Dr Frost with his doctorate, university orator, Alan Hunt, said that "his natural PR gifts, a generous spirit and a genuinely warm personality have made and sustained many friendships.

"He has been a highly effective champion and advocate of Bournemouth University, raising its profile greatly in Dorset and the region, and supporting the Bournemouth University Foundation Trust," Hunt continued. "Now today this university, which he has served so well, is glad to honour him and give him a place for life in the ranks of its graduates."

Accepting the award, Dr Frost thanked the university, his wife and family, and offered his fellow graduates a few words of encouragement.

"The first thing is to look after yourselves, maintain your health, achieve a good work-life balance and establish a stable environment at home," he said.

"Secondly, have great respect for your fellow human beings and remember the impact that you have on the people around you.

"And thirdly, the best advice is to grasp opportunities while you have them. Don't find yourself in 45 years saying 'if only'. I look back at you here and I don't regret what I've done in my life. I have very few 'if onlys'."