Actuary of the future: Jack May

Catlin's Jack May admits to owning an 'I ? spreadsheets' mug 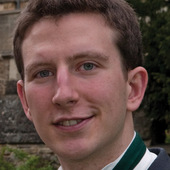 Once he'd stopped laughing, he told me I'm one in a million  but added that this means there are a thousand people in China just like me.

Something that's a challenge or ?involves solving a problem. I can get a little obsessive about things if I can't figure them out. I think it's a competitive thing.

'Why not?' If there's something you want to do, give it a go.

Who do you admire most and why?

It sounds corny, but I'm full of admiration for everything that ?Nelson Mandela's achieved. We recently visited Robben Island and it really hit home  to go through all that oppression and come out willing to forgive is pretty amazing.

What is your most 'actuarial' habit?

Everything important gets kept in a spreadsheet  Excel was our own personal wedding planner. My wife bought me an 'I ? spreadsheets' mug ?as a wedding present and I think it's pretty telling that I thought this was incredibly romantic!

I suppose an ideal weekend would be spent by the fire in a nice old-man pub with my wife and lots of friends. If they could put the rugby on TV as well, that would be nice.

Ski or snowboard instructor - I got the qualifications for both after university but somehow ended up in a desk job instead. At least I've got an alternative ready for my midlife crisis.

Tell us something unusual about yourself

I was born in Japan and my parents didn't have a name for me, so the nurses in the hospital called me 'Chingo-Bim'. I think it means 'awkward-looking child with the oddly shaped head'.

I proposed to my girlfriend when we were only 22 and had been together for less than five months. We've been happily married for two years now, so I like to think that it was at least a calculated risk!

What's your most treasured possession?

Well, besides my "I ? spreadsheets" mug, I do like a good gadget. I was recently given a Kindle, so that's got pride of place at the moment.

If you ruled the world, what would you change first?

I'm definitely a night-owl rather than a morning person, so I might make the working day start a few hours later. Or maybe ban phone calls on commuter trains - you can only listen to someone else's office gossip or dinner plans for so long.