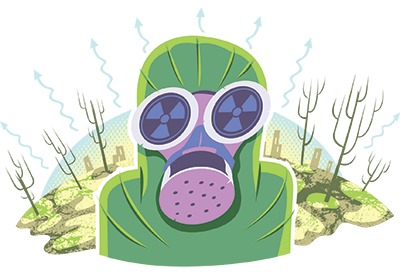 In 25 April 1986, nobody knew what a civil nuclear reactor meltdown would look like. The world would learn the following day, on 26 April.

The Chernobyl disaster affected up to two million people, contaminated an area two-and-a-half times the size of California, and caused economic damage pegged at $235bn in 2009. But this wretched disaster also taught us about insurance.

Mikhail Gorbachev, then-president of the Soviet Union, often cited the Chernobyl nuclear disaster as the true reason for the fall of the Soviet Union - not only due to the failed cover up, which resulted in the glasnost policy of openness, but also because of the economic hardship it caused, which contributed to perestroika, the restructuring of the Soviet economy.

Due to its lack of adequate protections, Chernobyl was uninsured. The entire cost of the containment and clean-up efforts thus fell on the Soviet government; it spent close to 18bn rubles ($23bn in 1986) in the aftermath of the disaster. Additionally, the Soviet Union was not party to the International Atomic Energy Agency's (IAEA) Vienna Convention or the Organisation for Economic Cooperation and Development's (OECD) Paris Convention, allowing it to deny compensation to foreign victims.

Before Chernobyl, Western governments had already realised the unique nature of nuclear technology and its potential damage and had thus passed nuclear indemnity laws, which enshrine five basic principles - strict and exclusive liability of the operator of the plant, compensation without discrimination, mandatory financial coverage of the operator's liability, exclusive jurisdiction, and limits of liability in amount and time.

The OECD passed the Paris Convention on Third Party Liability in the Field of Nuclear Energy in 1960; while IAEA member states passed the Vienna Convention on Civil Liability for Nuclear Damage, similar but with a larger geographical scope, in 1963. However, the existence of two similar yet different conventions was problematic - victims in a state that was party to one convention did not have any compensation rights for an accident happening in a state that was party to the other. Due to conflicting obligations, parties of one treaty couldn't sign onto the other. The Chernobyl disaster led to a push to connect the two, resulting in the Joint Protocol in 1988.

The Joint Protocol extends to states adhering to it the coverage that is provided under either convention to which the state is not already a contracting party. This created a bridge between the treaties and ensured that only one of the two treaties would be in force for a particular incident.

The Vienna Convention was amended in 1997 by the IAEA, raising the minimum liability amount to 300m Special Drawing Rights, increasing the statute of limitation from 10 years to 30 years, increasing the damage covered and making the geographical scope truly global.

The Convention on Supplementary Compensation for Nuclear Damage was also passed that year to establish a system of supplementary state funding.

This does not require adherence to the Paris or Vienna nuclear conventions, appealing to states that do not want to spend a lot on phasing-in requirements.

In 2004, the Paris Convention was also updated, setting the total minimum liability amount at 700m and extending the scope, time and damages covered. This protocol has has not yet entered into force, as some signatories have not yet ratified the treaty.

Today, only China, Pakistan, Iran, North Korea, Taiwan and South Africa are nuclear states not party to any convention on nuclear liability, signifying there is still a long way to go when it comes to an international nuclear liability treaty.

This article appeared in our September 2019 issue of The Actuary.
Click here to view this issue
Filed in
Students