Pioneers of the world

Jason Whalley looks at successful leaders and their styles of management 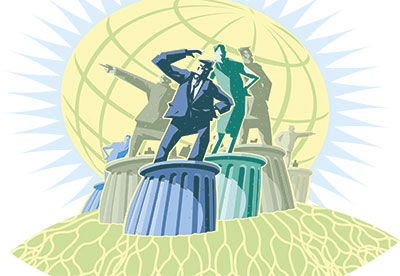 You can pay a soldier to hold a gun. To follow you. To fight for you. But you cannot pay them to believe.

So what does it take to be a true leader? What qualities must one possess in order to rise to the top?

Is it the self-assuredness in answering to nobody and nothing except their own clear, contextualised vision? Having the charisma to magnetise companions to their cause perhaps? Or the intelligence to propel humankind upward to new heights? Or simply ambition alone, to guide them through the darkness of self-doubt?

The history of mankind boasts a variety of heroes and villains; winners and losers. These men and women were capable of challenging the status quo; even if that meant being burnt in the process.

Modern-day leaders are frequently judged by the universal metric of success - money. As such, leaders in business often capture the headlines - especially when making waves.

Elon Musk, for example, the record-breaking innovator, founder and chief executive of SpaceX, has thrown fuel onto the fire to reignite the space race. The entrepreneur has legions of highly skilled individuals falling over themselves to work for him as well as the backing of an army of investors, and with it he has forced SpaceX and Tesla to be taken seriously.

Musk has demonstrated an unwavering dedication to advancing humankind and shows no hint of slowing down. Where investors have been unconvinced of similar endeavours, he has a proven track record of success, accompanied by a burning fire to inspire others to follow him in such projects.

Bill Gates and the enigmatic late Steve Jobs were the driving force behind revolutions to the technology industry over many years - and now, joined by Larry Page and Sergey Brin of Google, their product lines are used every day all over the globe.

Though their leadership and management styles and recipes for success may differ, all went from strength to strength, evolving and allowing their brand to prosper.

However, it's important to note the difference between leadership and management. Some of history's most renowned leaders were dependent on followers with a flair for organisation. Even institutions devoid of innovation are able to thrive by maximising efficiency. Success is not contingent on creating something new.

Successful leaders are able to convince hordes of supporters to follow their vision. Politicians undertake a trial by fire to reach the top - public judgement - although, ultimately, they are rarely popular.

Angela Merkel, boasting an impressive service record, has been a force in European politics for quite some time. The German politician has an unusual educational background relative to her peers; a doctorate in quantum chemistry, which - coupled with her calm demeanour - only serves to draw people to her point of view as a source for knowledge.

The chancellor of Germany continues to stand firm in the face of adversity amid tensions surrounding the European Union - an accord of which she is frequently and widely designated as the de facto leader. She has a furious storm to continue battling, owing to the present political climate, but so far there is no evidence to suggest that she would shy away from the challenge.

Modern-day leaders - of various scales - across the globe use different styles of leadership to best progress their ideas.

And what can we learn from these leaders? Plenty. But developing an approach that best suits you seems like the most appropriate place to begin.

This article appeared in our April 2018 issue of The Actuary.
Click here to view this issue
Filed in:
Students