Mankind to meet its match? 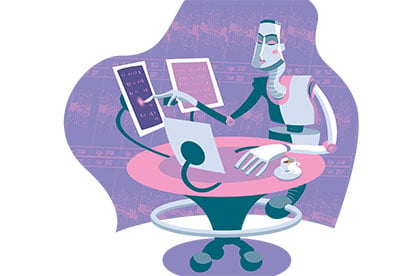 Automated machines replaced humans in steady, repetitive jobs in the not-so-distant past, but it's different this time. A fundamental pillar of learning: complex actions can be broken down into multiple simple actions, and computers are getting very good at breaking this down and analysing data.

Not a new concept - but far from archaic; scientists have toyed with the idea of creating an artificial intelligence (AI) entity for generations. Doubt and pessimism have surrounded such projects and the inherent complexities underlying consciousness, but recent developments have highlighted the vast potential of machine learning.

With impressive financial backing, some of the world's most valuable companies have dedicated divisions and committed substantial resources to researching AI. DeepMind, the neural network owned by Google, made headlines last year after its AlphaGo programme was successful in a match against the world champion at strategy boardgame Go. The win came as a surprise to the Go community - the game had long presented computer programmes with immense difficulties in reacting to different strategies employed by opponents.

While mastering Go was a technical breakthrough, practical applications of the programme are limited. In contrast, the technology behind self-driving vehicles is stealing the spotlight owing to revolutionary prospects; facial recognition software is replacing traditional locking mechanisms; and military simulations are being employed to minimise risk and casualties.

Perhaps the point that hits home hardest is that project management software can analyse workloads and is intended to eliminate middle-management roles.

Even the stock market has been targeted for a shake-up.

EquBot launched its AI-based technology in October 2017, to construct a stock portfolio through deeper analysis than any human could carry out. The fundamental strategic trading algorithms have been refined over and over again by market participants. Firms have utilised advanced computing technology to study datasets for years, and are expected to continue to do so for the foreseeable future, hand-in-hand with humans. For now, at least.

Advancements in recent years have meant that many firms can outsource work at an international level to achieve lower overhead costs. At the behest of strategic advancement, entire departments have been relocated on a global scale to maximise efficiency gains. Assembly-line robots have replaced workers in factories to the benefit of the manufacturer and - in some cases - the consumer.

Strategic advancement may again be the dark call for numerous positions in a variety of industries. Like the assembly-line robots, AI can be purpose-built for workplace roles, and handle duties potentially much faster than any human.

How cost-effective and practical it would be to implement machine learning in the workplace remains to be seen, but there is no doubt that many companies would seize such an opportunity if the benefits outweighed the costs.

Readers in the actuarial profession may feel a twinge of anxiety, but can take solace in knowing that the communication and people-facing section of machine-learning technology lies firmly in the nascent stages. Consultancy-based roles are among the least likely to be in danger from the rise of the machines.

It's easy to feel daunted at the thought of being replaced by a machine, but this is simply the next step in making human lives easier.

It started with fire. Then the wheel.

The carriage. Electricity. The train. Planes. The internet. When faced with the fear of losing a job to a machine, it's easy to forget that innovation boosts productivity, improves living standards, and makes our lives easier.

Governments around the globe must be quick and efficient to tackle any spikes in unemployment that result from such developments. Maybe they could use AI programmes for this too.

This article appeared in our January 2018 issue of The Actuary.
Click here to view this issue
Filed in
Students
Topics
General Insurance
Technology