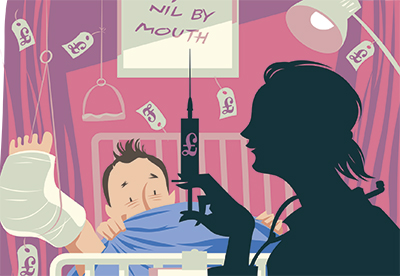 The NHS has received additional funding to prepare for a surge in the expected number of patients this winter. Health chiefs warned that demand would put significant strain on both staff and finances, which further emphasises the need for support.

Our nation prides itself on the ability to provide treatment to all its citizens - an obligation unmatched by a great many other countries. However, questions are increasingly being raised regarding the stability and sustainability of the service, and how long it will be able to exist in its current form. Costs already represent a significant portion of the national budget, staff are working longer hours, and an ageing population might be the iceberg the NHS is unable to steer away from.

People may complain about long waiting times - but such mechanisms are necessary to provide healthcare benefits for everyone.

Reforms to the health treatment service are, more often than not, mostly bark and little bite. But, let us suppose that the model changes overnight. A switch is flipped. Private healthcare takes over. Treatment costs money. People pay for insurance premiums - and insurance companies pay for healthcare.

Immediately, ethical issues spring to mind. What happens to those who cannot afford the insurance premiums? Leaving them to suffer and die represents the polar opposite approach to current practice. Alarm bells. People who desperately need treatment are abruptly denied it. A very visible forcefield lies between life and death. Suddenly money and health are forcibly intertwined.

What happens to the mentally ill who are unable to fully care for themselves? To those that have trouble sticking to an administration for a breadth of reasons? Without support, the future for these people would be stark indeed.

To play devil's advocate - the flip side of the coin is the primary method of care in other countries. Private healthcare is a multi-billion dollar industry in the USA. It is built on the foundation that treatment is there for those who have insurance, and those who work hard will have insurance. A self-supporting, sustainable system - one that compares costs against the value of a human life. Saving most - but not all.

Still, the US system is widely criticised for the excessive costs that can bankrupt hard-working families, and the price of even historically cheap treatment has recently been spiralling out of control. In a pseudo-regulated capitalist market, it is just too easy for sharks to swim to the top of the food chain.

By 2016, the price of EpiPens increased by around 500% over a seven-year period in the US. The entity responsible was chastised by the US government and public for adopting such an irresponsible pricing strategy, since the product itself was so cheap to manufacture. This not only highlights the dangers posed by sole suppliers controlling the industry, it encapsulates how those in need of treatment are very much at the mercy of these corporations.

The fortunes of those unable to afford insurance premiums would be directly opposite to actuarial students. Actuaries seeking a change may be rubbing their hands together in delight; with the market set to explode, opportunities would be rife. Innovators would be at each other's throats - competing to be pioneers in the emerging market. And with models from the US to emulate, already the data is there for competitors to sink their teeth into.

Middle-market providers could spring up to offer insurance to the masses, and the absence of scarcity would mean competition pushes the price of insurance firmly down relatively quickly at the behest of the consumer. Then when the government has awoken from the bureaucratic nightmare, regulation and legislation should give consumers confidence that they are being treated fairly in a nascent market.

Nevertheless, the healthcare regime in the UK does not appear to be fundamentally changing any time soon. And though the system has its critics, the overwhelming majority are thankful to be cared for when interrupted by an unhealthy dose of fate.

This article appeared in our November 2017 issue of The Actuary.
Click here to view this issue
Filed in:
Students