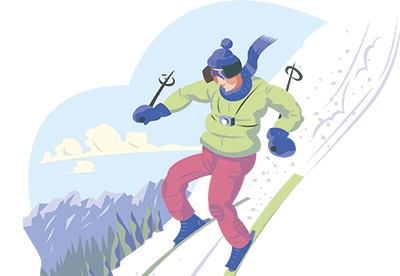 If you've been fortunate enough to go skiing you will probably be able to relate to me when I say that it really only takes up a tiny fraction of the holiday. The rest is taken up either talking about skiing, changing into ski gear, sleeping, or my favourite; allowing the clean crisp air to pink-up your cheeks as you cradle a bevvy in one hand and a camera in the other, snapping at the scenery to gawp at over a steak and chips later on.

Now I love going down the mountain on a nice easy run, taking my time and trying new things out. But at the end of every run I whip out the piste map and eye-up those harder runs, the reds, and the blacks. I can't help it. If uncle Jack does blacks for a warm-up, why can't I someday? So I try a harder run and truth be told, I don't particular enjoy it, I lose control, I fall over. I try again and I make it down just fine and yet I still don't find pleasure in it. I'm doing it to get brownie points for when I get back home, to cash in some street-cred as a totally radical panda-eyed, alpine skier dude. Nothing more, nothing less. I'm probably just a wuss. But this made me realise I do the very same thing in everything.

I am an extremely competitive person, as we all are in some shape or form, whether we like to admit it or not. What I get out of skiing will be different to others, but sometimes I really do find it difficult to accept that.

However, no greater competition is felt in this day and age than in the form of social media. Where the inner personal lives of those we know, as well as the rich and the famous, is but a tap away. It's a litter ground for absolutely everything to do with anything that happens at all, ever. Yet sometimes when scrolling through, I see old school friends getting engaged, others swimming in the turquoise waters in Thailand, while some gaze out over New York City from the top of the Empire State Building. And then there's me. Slobbing out on the sofa with a half-eaten Texas BBQ pizza splayed out in front of me, as I stretch for the TV remote to start the next Netflix addiction, while fending off the dog who is eagerly awaiting the opportunity to steal some bacon off my pizza. And all the while I really should be studying. Ooops!

Don't get me wrong, I'm immensely happy. But it always makes you wonder as you peer through the looking glass of the four-inch screen into the lives of others.

Set your own standard

Steve Young, professional American football quarterback, does offer some handy advice for those of you in the same boat as me; you know the sinking one:

"The principle is competing against yourself. It's about self-improvement, about being better than you were the day before." Cringe all you like, but there's a valuable lesson there!

A good example of this in practice is in horse racing. It is a very familiar sight to see horses wearing the recognisable masks much akin to the headwear worn by Mexican wrestlers. These aren't to intimidate opponents like in 'Lucha libre', but to eliminate as many distractions to the horse as possible. These blinkers narrow the focus of the horse to straight ahead, and therefore, it performs only on its own efforts and not to that of its peers to the right and left.

What I've learnt most, from both the examples above, and life in the workplace, is to try as hard as possible to put the blinkers on. Just as though I were at Ascot, I try to win my own race, being better today than I was yesterday, and most importantly to realise that happiness is my version of happiness. Comparing that with others' is toxic.

Despite competition, if I am being the best I can be, and I'm having a great time doing so, then in my opinion I have already won. And not many people can say that.

This article appeared in our April 2017 issue of The Actuary.
Click here to view this issue
Filed in
Students