How Christmas stole the Grinch

Jessica Elkin wonders how different the choices of the heart and those of the head can be, and which ones are actuaries best qualified for? 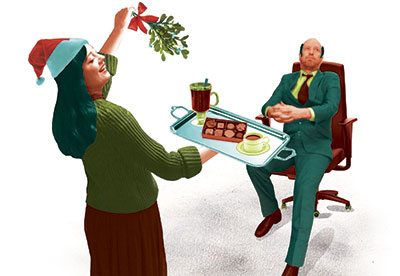 I'm sure we all know a Scrooge or two when it comes to Christmas. Those awful misery-guts, constantly complaining about how it's a trick by consumer capitalism to get us spending. Sitting in the corner, arms folded, grumbling about all the usual traditions. They refuse any glad tidings you send their way, they do not partake in goodwill to all men, and they don't believe in Father Christmas. I bet you know at least one person like this.

I have taken it upon myself to re-educate one anti-Christmas actuary - let's call him the Grinch - this year. It's a challenge, but I'm up to the task. My love of the season is Herculean in strength and more constant than a flat discount rate.

What you have to do is find out what they don't like about the season, avoid that stuff, and expose them to more things in tune with what they do like. This might be as simple as plying them with baked goods shaped like Santa, or jazz renditions of Christmas classics. Maybe they like mulled wine and twinkly lights. In my case, it'll be Christmas tree chocolates, a good cuppa and a roaring fire. He's sure to come around.

Once you've done the groundwork, you must gradually introduce extra things that will slowly ingratiate Christmas with them and melt their ice-cold hearts. On a crisp winter day, 'accidentally' happen upon a Christmas market. Alternatively, take a trip to an inviting ice rink. (The latter won't work for my Grinch. Apparently, he has the grace of a drunk giraffe). Gradually, the sheer magic of it all will overtake them, and eventually they'll submit wholly to festive cheer, tears running down their face - like Winston at the end of 1984, if the book had been about the joy of Christmas and not a terrifying dystopian nightmare.

I went to a talk on soft skills and networking once, where the speaker said: "Don't treat people how you want to be treated. Treat them how they want to be treated." The speaker was a bit of a schmoozer, kind of unctuous, someone who may have been a recruiter or estate agent in a former life, but I've always remembered that as a nice bit of wisdom. That's why I'm convinced that my Christmas machinations will work. You reel them in with the things they like first, make them feel at home, then BAM! - whack them with glad tidings. It's all about empathy, I suppose. Relating to people, understanding what concerns them, adapting to their needs.

Empathy is something I can't help wishing the 'powers that be' had more of regarding the holiday season. They love to slip in judgment day as late as possible, enabling us to fret about exams, even while we wrap presents and drink eggnog (one of the most unappealingly named substances there is). This year, the event falls just a few days before Christmas. So it's certainly going to be on our mind. Rumour has it that your loyal student editor might even become unqualified for the job, if you get my meaning. So fear not, comrades! I am wringing my hands with the best of you.

It is a little cruel of the IFoA to leave the sword of Damocles hanging above us, however bedecked in holly and mistletoe, until so close to 25 December. I'm guessing you and I might find ourselves becoming somewhat Grinchy ourselves should things not go our way. The cure for me, which I can recommend to everyone, is to ensconce oneself further in everything Christmassy.

It would be a trial, but nothing can quell my love of Christmas.

However, if it doesn't happen for us, you'll move on, and I'll move on. You keep trying, don't you?

I won't give up on the Grinch until I reach my end goal, which will be to get him into a Christmas jumper. And maybe some tinsel. Dr Seuss thought it possible, so I do too.

The main thing is that we're all in the same boat, and most of us have someone willing to do whatever underhand, sordid activities it takes to manipulate us into happiness. Those people are to be valued, in my opinion.

The other thing is to have patience - eventually, in the words of the late great Dr Seuss himself, "will you succeed? Yes! You will, indeed! (98 and three-quarters per cent guaranteed.)"

Here's wishing you the best Christmas and exam results possible, and for the chance of my being fired before the next festive season comes around.

This article appeared in our December 2016 issue of The Actuary.
Click here to view this issue
Filed in
Students