The Christmas gift of foresight

In the manner of Rudolphs red nose, Jessica Elkin gives some thought to lighting the way ahead with a new festive strategy for present buying 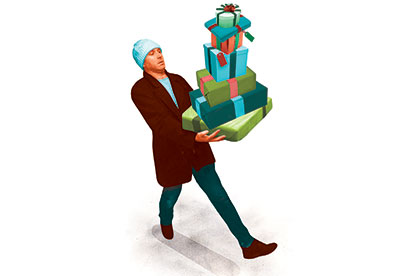 When you're a child, Christmas is a spectacle that takes its sweet time to come around, no matter how desperately you will it on with your tiny fists clenched. The sheer magic of it - all bright lights and breathlessness, and crunchy frost underfoot - taunts you for months. Months that feel like years.

The image of Frank Abagnale returning to his mother in Catch Me if You Can comes to mind - fugitive Leonardo DiCaprio peering in at a lovely Christmas scene with his messy hair and his hands pressed against the window so close but just beyond his reach. So it is, when you're young and impatient.

As grown-ups, you simply have more to do. I can hardly complain about my own plight here, being childless and single, but every year it gets to a matter of weeks until the big day when I realise I've barely done any Christmas shopping. By which point, I have inevitably run out of money. It's almost a tradition.

Working in a field that specialises in looking forward, or "fortune-telling using maths", as I like to sum it up, you'd think noticing that this present crisis occurs at the same time every year, and with the same timescales, would be within my ability.

Insanity is doing the same thing over and over and expecting different results. And yet, to misquote something else Einstein may not have said, there are limits to everything except the universe - and human stupidity.

Enterprise risk management
I'm highly trained, so perhaps I need to apply my actuarial skills, sharply honed since passing CT1, to sort this all out. We are problem-solving people after all.

To start with the driest, most boring of tasks, I could keep an action log. Make a list of all the people I have to buy for, put staggered timescales in, and review my progress regularly. That sort of thing. I could call it 'The Yule Log' to give it a festive sheen.

As for the money problem, that has a simple cashflow modelling solution. Create a budget, decide what money I need and when (refer back to the action log), create a simple model against the interest I can expect from my bank account, make regular contributions throughout the year. The contributions would probably have to have their own account so as not to be absorbed by Christmas soirées, and the office vending machine.

To get the most out of my money, though, I'd need a sound investment strategy. Current accounts aren't generous. I could match the necessary income with bonds, perhaps?
Or a liability-driven investment (LDI) strategy could hedge against present cost inflation.

The biggest complication is creative power, or a lack thereof. Could we model the likelihood of my having flashes of inspiration as to what to get my lovely but already well equipped family, within budget and the appropriate timescales? It would be some sort of negative binomial distribution, I imagine. And there would need to be contingency plans in place for bouts of shopper's block.

Practical magic
The biggest problem with all of this is something I imagine to be a recurring issue in actuarial work. It may be theoretically sound, work perfectly, or look real swell on a graph, but it doesn't actually help get the job done.

It's rather like that joke about theoretical physicists and spherical cows (which has a Wikipedia page if you're interested). The gist of it is that a physicist is drafted in to help a farmer increase milk production and, after a long drawn-out and complex project, he finally says: "I have the solution, but it only works in the case of spherical cows in a vacuum." The solution is perfect, but reality is not - which is a shame, because a spherical cow in a vacuum would make a neat Christmas present. I imagine a sort of terrarium.

So there you have it. I can't expect to be an expert in making financial sense of the future and Christmas gifts. I'll just have to approach the dilemma the same way as other mortals; with a great deal of stress and inadequacy.

I should probably hit the high street soon. It looks like another year for the Christmas Eve panic-buy it is tradition, after all.
Filed in
2015