Jessica Elkin offers advice on the use and abuse of business diction, keeping it simple, and avoiding slanguage at all costs 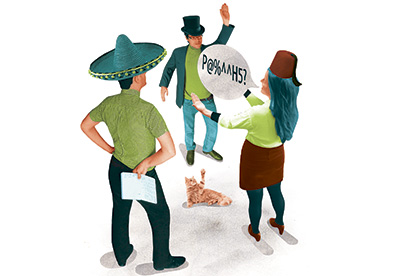 "Jason flagged some tweaks that were needed in the report, so we'll touch base later - in the meantime, can you take ownership and action the next steps?" Cringe.

I was recently chatting to colleagues about our most hated buzzwords and jargon in the workplace, and our casual survey concluded that there are a lot. Anyone you ask about this will have their own bugbears.

Mostly we seem to be aggrieved by just how poncey they sound. 'Take offline' instead of delay. 'Synergise' instead of combine. 'Buy-in' instead of engagement. 'Universe' to mean simply everything in that context - for instance: 'in the insurance universe', which essentially means 'in insurance'.

Personally, I'm not a fan of people having different 'hats' on - a fairly absurd figure of speech. Having your company trustee hat on, or your strategic consultant hat on, or whatever. It simply means from the point of view of that particular position. With my student editor hat on, I find it to be overused.

But sometimes it's more than that; sometimes it's the way the words are used that gets our goat. 'Tweak' made the list because of its regular use to mean extensive alterations rather than its true meaning of small refinements. A scheme actuary in my firm hates 'prudent' as an example of techy actuary-speak. Another colleague believes 'core competencies' to idiotically under-represent the sorts of skills you might expect of your staff in practice - you'd look for proficiency over adequacy, surely?

Some financey words even seem to cloud meaning, such as 'wrapper'. Tax wrapper, services wrapper, product wrapper, and so on. I have never particularly understood what its actual meaning is, if anything. In theory, I'm meant to be smart, so I Googled it to see if I was being a dunce, and the internet can't seem to agree on its meaning either.

I can admit my confusion because, having mentioned my problem to a super-brainy senior colleague, he confessed that when his partner, who works in banking, uses the term 'wrapper' with reckless abandon, he normally just assumes "it's something way too complicated for me to understand". And if he doesn't know, I can feel better about my own ignorance.

We all do it though, don't we? As actuaries, or actuaries-in-waiting, it's easy to absorb the common parlance that surrounds you, and reflect it back. While researching this piece,

I came across plenty of phrases I'm guilty of using. In an earlier draft of this column, I nearly used the phrase 'wholesale change', which I think we can all agree makes the list.

Maybe, on some level, we're simply trying to fit in, or sound as fancy and clever as everyone else does to our eardrums. Unfortunately for those of us struggling with the CA3 exam, at least half of our job is communication. This is particularly true in client-facing roles, and also while working with more junior colleagues. In most areas of our role, we are going to be working with - I can't resist dropping in a clanger, just for fun - 'asymmetry of knowledge'. So it's important to be non-sophistiqués in our wording as much as we can.

It's more than that, though. Finance is an area of opacity for most of the general public. The average person does not feel comfortable in some areas of finance - such as pensions, for example - even though it is vital that the nation gains an understanding.

If we want the public to engage better with savings and protection, as it really must, we should try not to couch what we do in jargon. If you start from a position where you're using esoteric language to describe something, the listener is just going to switch off.

It's not like we can ban a list of words and expressions; nor would it be desirable to do so. However, if we can keep our language both simple and informative, we may find our audiences more appreciative of what it is we have to say. Moreover, the English language has a vast vocabulary. Let's get creative!

I've probably made some egregious faux pas here myself. Feel free to let me know at [email protected]- or tell me your own hated business jargon. Then I can avoid it at all costs.