Jessica Elkin compares superhero sequel X2 to the APS X2 actuarial standard, and finds some surprising similarities in the process 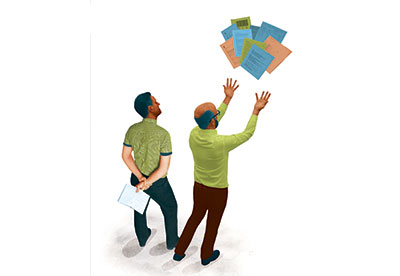 Although in theory most Hollywood sequels are vastly inferior to their earlier counterparts, I must confess that I very much enjoyed X2 when I saw it in the cinema at the tender age of 16. My enjoyment could be attributed in part to the involvement of Hugh Jackman, of course, and I probably didn't have superb taste at the time in any case, but the IMDb score of 7.5 suggests that many others agreed with me. The X-Men franchise has continued to flourish ever since.

Last month the actuarial profession brought out its very own X2. This one differs from the cinematic version in that it totally obliterated its predecessor (APS P2) when it came into effect on 1 July, instead of existing and complementing it as the X-Men films did each other. More accurately, APS X2 has made APS P2 redundant, but 'obliterated' sounds much more exciting in the context of superhero films.

Perhaps unsurprisingly, there are other differences between the two X2s. The Hollywood blockbuster exists to entertain people who enjoy profound and moving art with lots of excellent fight scenes, whereas APS X2 sets out the responsibilities of members concerning the review of actuarial work.

Under the new standard, it is for those responsible for a given piece of actuarial endeavor to decide whether it requires a 'work review' or an 'independent peer review' or neither. Details of which kinds of assignment may need which kinds of review are not given, as it is expected that the members involved are able to exercise some decent judgment on this.

Generally the work review requires at least two people to have looked at it. Both can have been involved in its production, so reviews will typically be commonplace in actuarial assignments already. Essentially, work reviews are the equivalent of non-mutants in the X-Men world. They do the job, but sometimes you want a little something extra if you're looking at carrying out any unusual, complex, or significant work.

The actuarial standard does not seem to feature Hugh Jackman at all (alas!), but it does have its own heroes of sorts. For an independent peer review, an added, extra-special pair of eyes needs to be involved. A bit like Cyclops, but less burny. The independent reviewer must not be otherwise involved in the production of the piece of work, and the requirement is for the reviewer to be someone with the appropriate experience and expertise to issue the work themselves.

All members of the IFoA must be able to justify any decisions they have made in relation to the level of review given to a piece of work. As students, this may seem a little daunting, but I would imagine that this decision is made by an experienced actuary rather than a junior member of staff. You wouldn't get Rogue to do Professor X's job, am I right? As kick-ass as she obviously is.

You might be interested to know that some of the taglines from the X2 film are relevant to APS X2, particularly if you are from the upper echelons of the profession and have been trying to work out how to make the standard seem more exciting.

When carrying out an independent peer review, you might argue that "The time has come for those who are different to stand united," as in the film, although technically, the two reviewers needn't agree with each other so long as there is a note to that effect added to the work. My favourite, though, is: "The ones we fear most will be all that can save us." Some of those top actuaries are a bit scary.

While naturally educational, as usual, this student page does not tell you everything you need to know about APS X2. There's plenty of guidance available on the IFoA website and the professional standard itself is very short and accessible. It's the duty of all members of the profession to read it, and why wouldn't you want to? I hear it has something to do with Sir Ian McKellen.