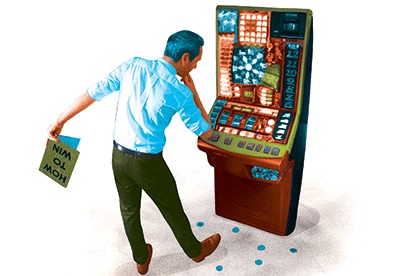 If someone told you their main goal in life was to 'make a difference' you might expect them to work for an NGO or become a teacher. Not work in finance. Yet, we actuaries shouldn't be too hard on ourselves. Insurance protects people and their loved ones from the consequences of adversity, and pensions secure the future for those who live long enough to be too old to work.

This month I've been thinking about famous actuaries - but there aren't many. For example, you may have heard of Howard Winklevoss, the American actuary, academic and entrepreneur, but his name is probably more familiar due to his progeny, twins Cameron and Tyler portrayed in the film, The Social Network.

Unfortunately, James Crosby is one of the better-known actuaries, implicated as the 'architect' of the strategy that led to the downfall of HBOS in the 2008 financial crisis following seven years at the helm. A damning report by the Parliamentary Commission on Banking Standards savaged him for his 'reckless incompetence' as CEO.

Crosby had quite a fall from grace given his 2006 knighthood for services to finance, which to his credit he offered to return, along with 30% of his pension to benefit shareholders. Talk about a U-turn.

According to the Financial Times, the 'world's most influential actuary' is David Li.

In the early noughties he pioneered the use of Gaussian copula models for the pricing of collateralised debt obligations (CDOs), considered a primary driver of the US subprime mortgage crisis of 2007-9, which partly led to - that's right - the financial meltdown!

Unfortunately for Li, his model - which gave financial institutions a tool to 'accurately' price CDOs for a range of complex investments such as mortgages - has since been called a 'recipe for disaster'. Fans of the model loved its mathematical elegance, but it floundered by relying on calculating co-association between securities using correlation. The underlying problem seemed to be that history cannot predict the future. Unlike Crosby, Li was not directly blamed, since he was not the one adopting it for pricing - that would fall to those pesky bankers again.

My favourite is Michael Shackleford, mostly for his nickname 'The Wizard of Odds'. Shackleford is an American actuary best known for his work on the mathematics of casino games. In 2002 he published a groundbreaking paper ranking slot machine payout percentages - previously highly secretive - to show which Vegas casinos set their machines with the best, and worst, payouts.

Shackleford's two websites analysing strategy for casino games were sold in 2014 for $2.35 million. Today he analyses new games for developers and casinos, and brings media attention to unfair gambling practices. In 2011 he won the title of 'Best Gambler in the World' at the famed Blackjack Ball. All of this after his early years as an actuary. Well you have to start somewhere.

Some actuarial pioneers were not strictly actuaries, mainly because the term hadn't yet been invented. Take John Graunt, for example, a haberdasher-cum-demographer who kicked things off in the 17th century. I couldn't tell you how he went from selling buttons to pioneering mortality studies, but he developed early human statistical and census methods, and is even credited with producing the first life table, giving probabilities of survival to each age. So you now know who to blame for CT5.

Edmond Halley is best known for deducing the orbit of the comet (no, it wasn't Bill Haley). In 1693, he published an article on life annuities allowing the British government to base prices on the holder's age. Halley's work followed on from Graunt's and is now seen as a major event in actuarial science. He was also one of the first people to attempt the dating of Stonehenge - he was wrong by thousands of years, but at least he gave it a shot.

Halley has a bunch of stuff named after him. Apart from the comet, there are a few craters in space, an Antarctica research station, a hospital ward in London, and a Wetherspoon's. How's that for success?

So there you have it. While we may not all be so fortunate, or unfortunate, in our influence upon the world, at least we actuaries can have an impact of sorts. What will yours be?