Actuary of the future: Vicky Randhawa 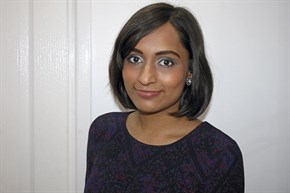 How would your best friend describe you? Easy-going, animated and comical.

What motivates you? Daydreaming of a life without exams, sitting on a beach in August feeling guilt-free, and spending Easter doing nothing but eating chocolate.

What would be your personal motto? Laughter is the best medicine.

Name five dream companions to be stuck on a desert island with? Jack Whitehall, David Blaine, Cristiano Ronaldo, Beyoncé and David Attenborough to tell bedtime stories. I'd become an awesome magician and dancer with mad football skills, and have a laugh until the inevitable happened. Having a good time - living it out as long as possible.

What's your most 'actuarial' habit? Not giving a straight answer when someone asks me what an actuary is.

How do you relax away from the office? I'm addicted to eating out, so you'd probably find me in a restaurant. If not, I'll either be planning a holiday, being on holiday, or watching football/endless series on Netflix in bed.

What is the funniest thing that has happened to you recently? I saw George Weasley (Ollie Phelps) of Harry Potter fame out last Saturday night. We became one night BFFs and shared black sambucas and a dance.

Alternative career choice? I'd like to run my own bar and/or hostel in another country.

Greatest risk you have ever taken? Using Tinder to find someone decen.

If you could go back in history, who would you like to meet? Sylvia Plath and Alan Turing.

If there was a movie produced about your life, who would play you, and why? This one was hard so I asked around. Apparently it'd be Emma Stone because she's funny and doesn't take herself too seriously. Obviously she'd need some major time in make up.

WIf you could be anyone else, who would it be? Errrmm Jamie Dornan's wife?