The writing's on the wall

As if an exam wasnt enough to test her nerves, Jessica Elkin deals with superstitions, shocks and spiders before and after the event 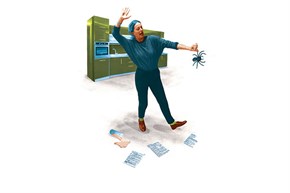 So, there I was. It was the morning of my final exam in April, and I was standing in my kitchen, eyes narrowed, focusing hard on what I could read in half an hour that would drastically improve my chances of passing. Don't laugh - it's worked before.

In my state of zen-like contemplation I unthinkingly reached into the back pocket of my jeans, and felt something decidedly odd in there that I pulled out to take a look at.

I jumped. My focus immediately collapsed like the shoddy house of cards it was, and I dropped it, squealing in the sort of way you never want to hear played back to you. It was a spider. Not a small one. Quite stocky, hairy, still 'juicy'. Dead as a doornail. Flat as a pancake.

My uncomfortable thoughts went as follows. 'Is that a spider? No, it can't be. They're not that wet. Maybe it's a raisin. No, it's a spider! Look at those legs curled around. How did it get in there? These jeans are tight. There isn't room for sidling spiders. It would have to have crawled into the jeans before I put them on, and when I pulled them on I must have squashed the spider with the pressure of my derrière.'

Not enough curds and whey

I've had many unfortunate spider incidences in my life, including the time I found one squashed into my pillow one morning. But this one was especially unwelcome. The implications of having an unwieldy bottom did not escape me.

"Why, today, is this happening?" I asked myself, mixing my exam-related stress with overwrought shuddering disgust. Surely it was a bad omen. I wrung my hands, which would obviously never feel clean again.

A preferable thought then presented itself. Maybe it's some sort of pre-emptive karma in return for a favourable exam paper. I've already had the bad karma, so that the good karma can show up where it's most needed.

I'll take a moment to emphasise that I usually consider myself a rational being and not a shaman. But during exams, all bets are off. A rabbit's foot is lucky; failing to respond to a chain letter is unlucky; black cats are both. If you see The Ring then you will die. See one magpie, immediately cast around for another to counteract the first; else greet him and ask after his wife.

It's not so different from a lucky mascot, is it? Or a lucky pair of socks. Except that my mascot is a rear that is dangerous to small creatures everywhere. If only Miss Muffett had been so gifted. Not enough curds and whey, I guess.

These mad thoughts occur not only during exams but before results. Part of me feels that until I actually know whether I've passed or failed, the result is still changeable. So the end of this month will see a lot of finger-crossing and sacrilegious praying even though the marks will have been set already. Short of bribing incorruptible examiners, my ability to affect the future is zero. And I don't have the required stealth or wealth to bribe anyway.

As results get closer, students will likely be divided into two camps: those who are desperate to know their results, and those who are trying not to think about it. Anyone you mention it to will either agree that waiting is a pain, or scowl and tell you off for mentioning it. Either way, it's not the most fun we've ever had with our clothes on.

Time will pass as it always does, and both anxiety and consolation are, most likely, futile. The good news is that there is nothing we can do, and it is, therefore, pointless to worry. Perhaps better to concentrate instead on the next SIAS event or - however outrageous this may be - on the next set of exams. Whatever works for you, I suppose.

Me? I'll continue to cross my fingers. And if I fail then at least I'll know to sew up the pockets of my jeans next time.