Change can be a positive thing, says Jessica Elkin, as the exam processes undergo a review and potential transformation 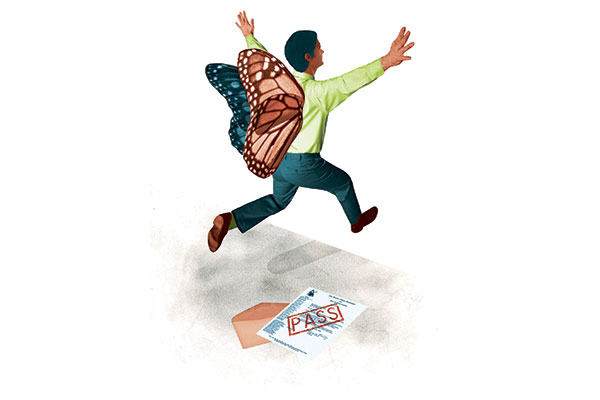 A change would do you good. So said Sheryl Crow back in the nineties; and it seems that the Institute and Faculty of Actuaries are big fans of hers, because we've seen a fair amount of change to the actuarial exams in the last couple of years. CA2 has been polished up all shiny, CA3 is now online, with CA2 set to follow later this year, and we have new and different exam booklets for the (ad)venture of online marking. Plus, CA2 and CA3 are no longer required for the associate level of membership any more. And so on and so forth.

This sort of thing won't really affect our day-to-day studying, so we can allow it to continue without too much disruption. That being said, there was a fair bit of umbrage taken regarding CA3 moving online, not to mention the new exam booklets whose thick lines some students found 'distracting'.

We humans are often a bit averse to change. A great collective sigh goes up whenever Facebook updates its design, even though a glance at the old format reminds us how much better it is now. Changes that seem a bit of a hassle can end up being sneakily good, once you become accustomed to them.

In response to greater numbers of students - a positive thing in itself as our profession expands and grows, in terms of public awareness as well as membership levels - the profession must adapt to deal with the extra pressures associated with marking and hosting so many practical exams. That's the underlying reason for the move of CA2 and CA3 to online platforms. But our complaints don't fall on deaf ears - for instance, those exam booklets have already been revisited and the lines thinned out. Success!

A review is afoot

Given the importance of past papers in exams, plus the generous rate of retaking that goes on, students may understandably be a bit wary to learn that there will be a strategic review of the exam process during 2015/16, with any changes planned for implementation in 2017.

The initial stages of the review will look at the later series of exams - your specialist technical and specialist application subjects - and examine them to ensure their continued relevance in their respective industries. Naturally, this is important given the dynamics of these industries and continued technical and technological innovation worldwide. To continue being relevant, our profession must move with the times.

Meanwhile, the CT exams will be viewed in terms of similarities or crossover, so some could be combined in a different format, or rejigged a bit. Hopefully, one day we'll see the disappearance of those old-fashioned commutation functions from the CT5 syllabus.

Another potential addition, and one I feel sure is inevitable over the long term, is output from computer programmes in the later exams. Given the importance of software in performing actuarial calculations, it is strange that technology hasn't already featured quite heavily in an exam or two.

There may be some concern that if the exams change too much, retakers will be disadvantaged in having to learn a whole new syllabus. We at the Student Consultative Forum have been informed that this review will not be a complete overhaul. That happened not that long ago. So you can be reassured that all that prior knowledge you will have built up in advance of the exams will be not in vain should some of you fail (sorry, it's just statistics).

It's comforting to hear that the profession is continuing to keep an eye on the subjects we are examined on, and that they're keen not to overturn the apple cart. Ultimately, any changes made are likely to be of benefit to students one way or another, either directly or indirectly, as much as we grumble.

The changes will come to the SCF well before implementation, and I'm always keen to hear feedback from anyone on the current system or subject content so that I can pass it on where appropriate. While there are risks associated with making changes, risks associated with leaving the examinations to stagnate and lose relevance over time are greater. And at least we can have some input.

Recently I read this anonymous quotation: "If nothing ever changed, there'd be no butterflies." I'll leave you with that.