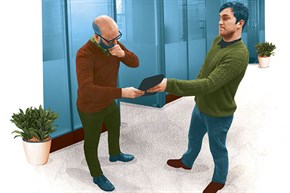 Once upon a time, there was an actuarial student living and working in India. Following an exam, she sent a message to some of her actuarial pals about it - she's one of those people, like me, who prefers to talk about an exam afterwards rather than delete it from memory. If only to check what others' approaches would have been to the harder questions.

One of her mates who replied was UK-based, and pointed out that he had not sat the exam yet. His sitting was the next day. Whoops - the exam in India had been brought forward by one day, and the first student had not realised that the same change hadn't been made elsewhere. She apologised for her error and that was the end of that. As far as she was concerned.

The information contained in her text message was generic and not especially helpful; the sort that told you a topic that you were already expecting would appear in the paper. The student who had just learned this information told a couple of friends anyway. Whether he believed this would help him and his friends is uncertain given the bland nature of the information. Maybe he was relaying the anecdote.

One of the friends shrugged, figuratively if not literally. The new insight didn't change anything, and the papers probably weren't the same anyway. Perhaps he figured that exams not sat at the same time would always be different. In any case, it didn't affect the areas he knew he needed to concentrate on, and he'd assumed the topic would come up. He dismissed the call from his mind, went back to his studying for the exam the next day and got an early night. The topic did appear in the paper.

The second friend was not comfortable with the situation. He decided to bring the events up with a senior colleague at work, and the events escalated. After a disciplinary hearing over two days, the student who had sent the text and the student who had not said anything were not punished but had to cover the IFoA's fees regarding their cases. The student who had called up friends to convey the information was suspended from the IFoA for a year, as well as having to pay fees.

What would you do?

This is a true story; or, at least, the basic details are true. I find it tricky to think about because I empathise a little with all of these people; or, at least, can see how these events could come about.

If the information had been actual answers to the exam, or some sort of detailed information, my reaction would be far more in the 'moral outrage' camp. But I can understand how a text message is accidentally sent to the wrong person - which has caused many social headaches over the years - and how you might casually mention something to your mates without thinking it's that harmful. Having received the information, you might decide to ignore it and, of course, take the ethically staunch position of reporting the wrongdoing. It must take some courage to report your friends.

My opinion of the IFoA's reaction to the events and the 'sentences' passed is that they made the right call, with a decent balance between punishment and leniency, and with some consideration of the severity of the consequences and the intent behind the actions. But it was certainly food for thought on the importance of care and consideration in all that we do, and the importance of whistle-blowing.

Having looked a bit more carefully at past student disciplinary tribunals at the IFoA (details are published online), they are usually a bit more cut and dried. People discussing answers in exams, or copying, or even taking notes in with them. These intentional transgressions are probably what spring to mind when we consider cheating, so it is easy to separate ourselves from the possibility of wrongdoing. But, as in the case outlined above, even inaction can land you in a sticky spot.

As we get to qualification and beyond, the sort of vigilance displayed by the last member is ever more important, with whistleblowing a key duty of an actuary.

But tales like the above serve to remind us that it's certainly not anything to forget about in the meantime!