As Valentines Day approaches, Jessica Elkin muses on a lobsters penchant to mate for life, but for singletons  its just you that counts 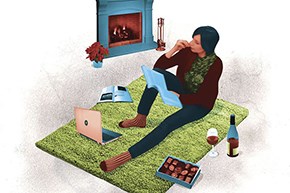 I would like to apologise to coupled-up actuarial students in advance, on account of this month's student page focusing on those readers who are yet to find their lobster. I have assumed that you lovers will be magnanimous towards your less fortunate counterparts, since this month is largely dedicated to you, and you already have the answer to your true love's duet. Let's take a moment to raise a glass to you, anyway.

For the singletons, or, more specifically, those who are single but would like to be attached, one problem with Valentine's Day is that it occurs at precisely the wrong time of year. I believe a better time of year for it would be summer, so one wasn't faced with such loveless isolation alongside standard-issue grey winter weather (a pathetic time for overcast hearts). Even a few more months into the year would help, as well-meant vows of self-improvement simply don't have enough time to come into fruition before Valentine's Day.

It's difficult to achieve very much on the latter front by mid-February, particularly as one never actually starts resolutions until back at work again and, let's face it, probably a bit after that. It's all very well if you have already found love, but single people have to suffer post-festive fatness and fatigue alongside their knowledge of their total and complete aloneness.

If Valentine's were a little later in the year, one would have had a chance to really put those new year's resolutions into effect and to feel good about all the self-betterment going on. That way, the single life would probably seem more of an appealing prospect. Simply put: Valentine's is an aggravator for people whose resolutions aren't going well.

I am exaggerating for effect, of course. I'm not as down in the mouth as all that, or as desperate (honest). New year's resolutions should generally not exist solely in pursuit of pleasing others. That's unlikely to be the road to success. Love yourself first, and all that. Ideally, resolutions are there to further mental and physical well-being, and to allow you to a) maximise your potential, b) take the next step of your journey to enlightenment, or c) some other stock phrase that you see in articles from LinkedIn.

Far from seeking a mate, some of you may have resolved to study more, and that's not a bad one to be getting on with. February seems a common month for the first wave of pre-April exam panic, as actuarial students everywhere suddenly realise that there are only two and a bit months until exams, they're behind on X assignments and they can't remember how to write by hand any more. This is why the resolution is such an important thing. Get back on that wagon! Use your study days to full effect! Stoke the fires of your intellect!

Deciding to study hard is one thing, of course, actually carrying it out is another. When taking exams, it's easy to focus on the results in the context of how others will react, thanks to that pernicious suitor - Fear. I think it's safe to say that most actuarial students are not that experienced when it comes to failure, or, at least, they weren't before they started their career. I'm sure most of you know already that failing isn't the end of the world, but it's difficult to shake off the dread of looking bad. It's a scary thing. If you fail, will your colleagues still love you?

This is the context in which to be selfish. I've already said that resolutions should exist for your own self-approval, and deciding it's time to knuckle down is part of this. Study for you, and study well. Do it because you want to succeed, not because of fear of failure. Don't pursue a goal for an external reward, just as you probably wouldn't pin the hopes behind your new year's resolutions on the need for a partner. In any case, when you push through and succeed in your goals, you will probably be more attractive anyway! It's win-win. Do it for you, and others will follow.

In the end, it's not often the route to qualification that will determine your career. Qualification is a tick-box of sorts, a nice thing to cross off your to-do list one day. Employers are going to focus far more on your performance in the office and the experience you have. You can concentrate your working hours towards pleasing others, but with exams, focus on romancing yourself.

Be your own lobster.