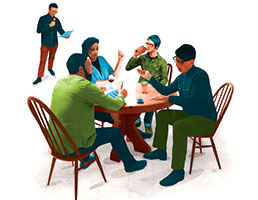 The Technical Actuarial Standards are a bit of a laugh, aren't they? They're like a party for the mind, set out in neat digestible guidelines. It's little wonder that Taz, clearly the best Looney Tunes character, was based on them. Note that, like some actuaries, he wasn't very good at making conversation and slobbered a lot.

If you're not already au fait with our friends, here's a little catch-up. The Board of Actuarial Standards (BAS) was formed back in 2005 when a review of the Actuarial Profession took place and HM Treasury subsequently asked the Financial Reporting Council (FRC) to establish standards for the Profession by means of an independent body.  This led to the establishment of BAS. Its aim was "to promote high quality actuarial practice and the integrity, competence and transparency of the actuarial profession - to the benefit of all those who rely on actuarial advice." Seems fair enough.

Since then, BAS has developed its guidelines, the Technical Actuarial Standards (TASs), in accordance with a predetermined conceptual framework. They started coming into effect from 2010. In a nutshell, the FRC is responsible for setting technical standards and the Institute and Faculty of Actuaries is responsible for setting and maintaining ethical standards, ingeniously called Actuarial Profession Standards.

Now, that's not to say that we weren't all doing a good job already. The IFoA wasn't a lawless wasteland before we were all rigorously completing TAS checklists. Or at least, I don't think it was. Perhaps those darker days are simply not spoken of.

The reality is, it's a good idea for any profession to have standards that are set independently, rather than writing its own rules. We don't want people to think of us as a bunch of rotund old geezers in a boardroom smoking cigars and slapping each other on the back.

If we are answerable to standards set by an external body, we are more credible as a profession and, crucially, have an individual and collective leg to stand on in the face of criticism by showing that we have complied with those standards. People relying on our work can then feel as confident as possible in our ethics and our accountability. I mean, would you want bankers setting their own bonuses? Oh, wait.

To keep things interesting, there are two types of TASs. Generic TASs apply to work on data, modelling and reporting, so most work that actuaries do, and specific TASs are simply any TASs which are not designated by the FRC as being generic. Usually you'll select the one/s appropriate to your practice area - for example, pensions - and see which bits are relevant or material for the work you're doing. Confusingly to my untrained mind, there is a TAS on funeral arrangements but nothing specifically on investment or enterprise risk management. Still, the TAS is young, so if we wait and pray we may one day glimpse them on the horizon.

All right, all right, so professional guidelines aren't laugh-a-minute, and some may feel that they're another layer of bureaucracy which they could do without. TASs are only a few years old, so chances are that some of you remember the olden days before they existed and wonder what they've really changed. They may have altered your way of working substantially but, since actuaries are a conscientious bunch, chances are that the addition to your workload on their account consists mostly of showing that the stuff you were already doing complies with them. The trick is coming up with ways to make that as efficient as possible.

For some people, however, the TASs may provide a helpful framework. A key focus in the guidelines is on ensuring that the users of actuarial work have all of the information they need to make sage judgments, as per the "transparency" objective above; thus giving actuaries a point of reference to ensure that they are being as helpful as possible to their clients (internal or external). And for a group that collectively is thought of as wanting in the communication department, that can be no bad thing.

For me, the best thing about the advent of the TASs is the possibility of actuarial wordplay. Looney Tunes aside, a particularly brilliant quiz team name at my firm's biennial pub quiz was Inglourious BAS TAS Ds.  Unfortunately, the quiz was run by non-actuaries who assumed that the team in question simply wasn't very good at spelling and used capital letters indiscriminately.

In all, there's no denying that the TASs can be a bit of a pain. But thankfully they're grounded in common sense, and with a bit more practice I'm sure we'll all be TAS-a-TAS-maniacs.