Santas little Elkin on past exam results, present swapping and future prospects of facing up to embarrassing party evidence 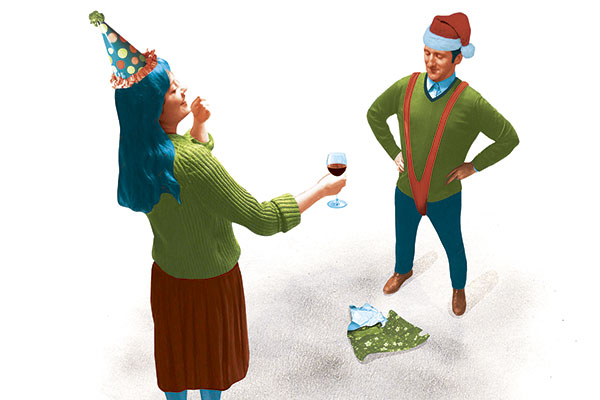 Christmas time, mistletoe and wine. It's a time for ice skating, cracker hats and 'quality family time'. Curling up with a hot cocoa as the windows steam up and all our favourite TV ads on tap. The time for Pete from the office to receive yet another 'I heart spreadsheets' mug to add to his collection. Not to mention the traditional gifts of 'unmentionables', of course

As a special Christmas present this year, some exam results are out earlier than usual. They haven't arrived in November since I joined the profession, and the later results day is usually only a week before Christmas, but the nice people at the IFoA have seen fit to gift us with their availability early.

The release of exam results has been a contentious issue. Many have wondered why it takes so long - although a look at the IFoA's website will explain just how much is involved in the post-exam process. The actual time of day when they are released has changed over time. Recently, it switched from 8pm to 5pm, ostensibly for the reason that no one wanted to wait around to press the button. But the idea that results would come out while many of us were sitting at our desks was a little unappealing, so following feedback it has now been moved back to 6pm.

The surprisingly early release date this session may well be the result of online marking, which was introduced to expedite the movement of papers between markers by removing the need to physically courier them around. It has the added bonus of improved security, although this will probably not be at the forefront of most students' minds.

If you're unlucky, the results will land smack bang in the middle of festive events, especially the office Christmas shindig. This season it will happen to me twice. Still, at least you have a chance to forget about any unfortunate news and celebrate the good with your colleagues, whom you hopefully like. Probably while doing some embarrassing dancing.

Festive office events are fascinating things, ones that break etiquette boundaries in a way that might get you a disciplinary on any ordinary day. They are attended by a rare breed of people who can simultaneously resemble professionals with sophisticated palates and teenagers drinking alcohol for the first time.

Secret Santa is a strange one as well. There is a voracious collective thirst for presents that are offensive or just embarrassing, particularly if the gift can be worn - think mankini, or 'Santakini' - as I witnessed a while back. If you have to buy for someone you don't know, there is the risk of pushing things too far. I once had to buy a gift for a pregnant colleague. Others recommended I buy her some condoms, but I wimped out and gave her chocolates and a face mask. Now, that's not going to lead to any hilarious escapades or memorable photos, is it?

There is a tradition at my firm for the new graduates to organise the departmental Christmas party. It's a nice way of team building that introduces them to the company and puts them on the social map.

In my year, we did a deal with the party venue that meant we had a bottle of wine per person, spread out amongst heavy drinkers and responsible one-glass types alike. We did not realise how ridiculous this was until the very end of the evening, and we were left trying to consume the remaining volumes of plonk. This, unsurprisingly, did not end well.

The day after the party you have to ignore that sinking feeling and return to face your colleagues, either having seen photographic evidence of your own humiliating antics - if the owner was cruel enough to share it - or just being aware that it exists. Some people will probably try not to look each other in the eye. There may even be apologies.

The best description of office Christmas parties appeared in The Guardian, which called them "the annual officially sanctioned opportunity for shame and ignominy".

These occasions can be cheering, hilarious, fun, wild, embarrassing, or dangerous. Or all of the above. The biggest upside to all of this mayhem?

At least no one's thinking about exam results any more.