Jessica Elkin recounts a tale of Christmas merriment and good cheer for all, minus one 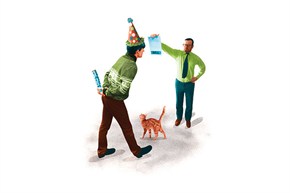 Barry is fuming. One of his clients' bills has not been sent out. And what is more, the offending item has been put back on his desk as though to taunt him, his own signature staring him in the face. He had wanted all loose ends tied up before he goes on his Christmas leave, and now how is that going to happen?

Unfortunately, Barry can't quite remember whom he gave the bill to for posting. He recalls the old adage he learnt at school about everybody thinking somebody would do something, anybody being able to do it, but nobody doing it.

On a better day, Barry might be thinking more productively. "What caused this failure in communication, and how can I personally change my behaviour to help prevent it happening again?" he might ask. Not today. He sees all the merrymakers frolicking nearby, singing carols and laughing festively, and he frowns. Barry wants retribution.

"Barry!" Tim calls, holding out a cracker expectantly. Barry hesitates for a second. The Christmas party starts in half an hour, and an image of the Grinch flashes before his eyes for a fleeting second. But what about the error, he thinks. Someone needs to pay.

"What exactly do you know about this?" he demands, holding the bill out. Tim frowns in confusion and looks down at it. "What do you mean?"

"I mean," Barry hisses, "This should have gone out yesterday. And now it's too late for the post even this week. Someone sneaked it onto my desk. Did you see someone lingering here furtively?"

Tim is temporarily lost for words, but then a smile springs up on his face. "Barry, come on! It's Christmas! We'll sort it out later! Chill out and have a drink." This does not sit well with Barry but, seeing that Tim is a dead end, he stomps away.

Susan appears out of nowhere and puts a paper hat on his head. "Much better!" she crows gaily. "When are we heading to the venue?" Barry rips the hat from his head and crumples it in a moody hand.

Susan laughs. "We've paid it in advance! Have you been on the eggnog already? You know, I've always thought it strange that the social calendar is busiest at the darkest and grimmest time of year. By rights we should be huddled indoors shivering like Dickensian orphans..."

Susan now seems to conjure another Christmas hat out of thin air to force on poor manhandled Barry's head. He is getting desperate.

"John!" he cries out at a passing student. Students are malleable, he thinks. "Nice hat!" John calls back without stopping. "Jaunty angle. Like it very much. See you at the party!"

What is it with office Christmas parties, Barry thinks gloomily. They seem to

talk about the weather and the FTSE 350, and university sports initiations where everyone competes at being the most offensive and someone leaves in an ambulance. The next day there is always the lingering feeling that someone should have

As Barry reflects on the madness of the adult working world, secretary Sonia stops by, munching on a mince pie. "Oh, good, you saw it," she comments calmly, gesticulating at the slightly rumpled bill in his tightly clenched hand. "You gave that to me bundled up with those report papers for filing, but I figured it wasn't meant to be in there. Hey, look! You didn't open your Secret Santa present."

She passes him a gift bag. Inside is a novelty stress ball moulded into an offensive shape. Barry pauses, then lifts it out for examination. Someone nearby whoops with appreciation, and a party popper is set off which showers his head with streamers.

"Hmmm," Barry murmurs. "I could use one of these." He looks at the stress ball in one hand and at the bill in the other, and the bill suddenly gives off a plaintive air. Perhaps it is not the end of the world - after all, it is Christmas.

"Shall we go and get some drinks in?" Enthusiastic agreement fills the air and he receives a pat on the back. Finally, Barry thinks, people are listening.

and study stress behind for a well-earned break. Personally, I'm expecting to get