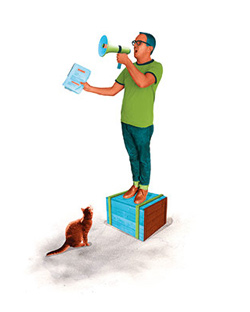 Moan, moan, moan. What a bunch of negative nellies students are! Particularly around examination time. Haven't done enough, there is too much material, why is there a question about zombies on that CT4 paper, where did the time go? I think we've all had enough.

That being said, life would be terrible if we all sat placidly on our haunches and allowed the world to roll on by unchecked. Votes for women, McDonald's injecting a bit of nutrition into its food, the reinstatement of Coco Pops after the 'Choco Krispies' debacle all of these things happened because someone wasn't afraid to stand up and have a good moan.

The same is very much true of students and the actuarial profession. Far from being an unheard voice, like those little green aliens trapped in the grabby machine in Toy Story, you have the power to effect change. The Student Consultative Forum exists as a body of representatives that meets every six months to discuss examination procedures in general, as well as any events in individual exam rooms and the nuances of specific questions.

Think of the forum as a go-between for the students and the Powers That Be. If a dog eats your exam paper, you were abducted by aliens during the exam, or the grammar isn't up to scratch in one of the questions, you can tell the group and they will listen, discuss resolutions to the problem or issue, or attempt to find ways to prevent such unfortunate occurrences.

As well as students taken from SIAS, various actuarial societies and yours truly, there are representatives from ActEd and the exam board, as well as the registrar and the director of education from the Institute and Faculty of Actuaries. Minutes of the meetings are available online, so you can check up on how your comments were discussed at a later stage.

There tends to be a fair amount of scepticism surrounding such ventures. Do they really achieve anything? I can vouch for the SCF. Its successes include the introduction of electronic permits; the wider availability of CA2 and CA3 in the north of England; the changing of exam centres in Edinburgh and Dublin because students were unhappy with them; larger desks in centres and the further training of invigilators. After questions raised at the SCF, documentation describing the process involved in marking exams and why it takes so long to release results was published, and CA2 and CA3 exam papers have become available for practice. Hot topics currently in the works are the publishing of pass marks for exams, which looks like it may be viable in the future, and an imminent review of the work-based skills documentation and instructions for clarity.

Many actuarial societies around the country have a representative on the committee, but if you are unaware of your nearest one then do drop me an email at [email protected]letting me know if you'd like anything raised. It will all be anonymous. Don't worry; I am very persistent and very tenacious.

Similarly, the profession is soon to put out a call for student volunteers for an international version of the SCF, in order to take into account the concerns of actuarial students worldwide. I can also reveal the following news:

? The possibility of results letters being emailed or available on the members website is being considered, still in early discussions.

? A new online marking system for the subjects CT5, CT7 and ST5 has been trialled in the recent exams session - you can expect more news on this later.

? Calculator use during reading time will be brought to the next SCF for discussion and

then to Education Committee for a decision. The decision would then take effect from

? CA2 can now be taken online.

? The CA3 exam is under review and an update should be available after the next SCF. In the meantime, another past exam question is available on the website.

? New guidance on passing exams is also available, with a new exercise and hints and tips published on the profession's website.

The IFoA's website is chock-a-block with further information on most of the above - and now that you've finished your exams, you have all the time in the world to read it.