Jessica Elkin ponders on the chances of an actuarial amour 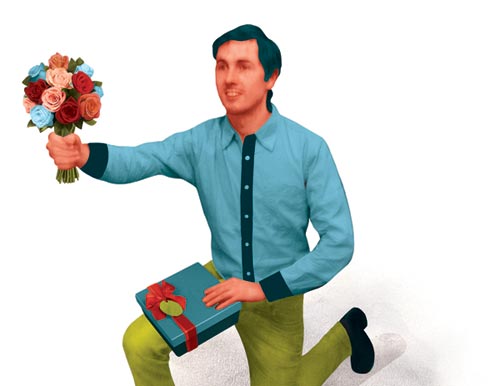 Once upon a time, a fair maiden seeking to find her heart's true love decided to forgo the damsel in distress rescued from a tower by a knight in shining armour routine and advertise on a listings site instead. More convenient and efficient (ever a watchword in business transactions).

A section from this listing reads as follows: "I've given a bit of thought to what kind of man I want to date, and I've determined that an actuary would be a good match for me."

Her explanation? "I love nerds. Actuaries know math in and out. Their analytical skills are top-notch. Now add to it that they need decent social skills to meet the professional communications requirements. In sum, actuaries are well-rounded business people who know how to write formulae."

The maiden goes on to extol the virtues of a man who uses annual leave to study, and reassures that she is independent enough to allow an actuarial student his own time to do so without distraction. Clearly, while not the most well-known profession, this actuarial lark has attracted some of the right attention. O happy day!

There is, besides, one summarising line in bold type, which reads as follows:

So, there you have it. Actuaries are Casanovas, the Don Giovannis of the business world. Brad Pitt armed with orange actuarial tables and a calculator. And, with Valentine's Day looming, it's good to know that as well as boosting our analytical, financial, business and communication skills, the exams lurking over our shoulder are also making us more appealing romantic prospects.

Now hang on a minute, you may be thinking, this is only one woman's view. She could be a lunatic, or planning to lure in unsuspecting males to devour like a black widow spider or Estella from Great Expectations. But there are some examples of actuarial appeal in the media, and if it's in the media then it must be true. Just like the tabloids.

Admittedly, there aren't that many actual actuarial celebrities. But look at the fanciable nerdy types on television. Carol Vorderman has always had quite a following. Not to mention poster-boy Brian Cox and his expanding fanbase. So his area is physics, but it's still an example of the growing popularity of the geek.

More relevantly, there's 'The Actuary Song' from the musical I Love You Because, which suggests dating practice based on formulae to help a character find love. You hear that? People are seeking relationship advice from actuaries. We're so romantically gifted that Will Ferrell's auditor character in Stranger than Fiction was dumped by his fiancée in favour of one of us. Ben Stiller's colourless insurance actuary from Along Came Polly even managed to nab Jennifer Aniston. Actuaries on top!

Unfortunately, there is a caveat to all this rejoicing. The small print of the listing that prompted this topic included: "Being able to fix either a car, computer or domestic appliance is appreciated. Must kill scary bugs. Couch potatoes will be denied. No jokes about figuring the probability that we'll actually end up together. That's a little too nerdy."

Ouch. Unfortunately, it seems as though you must be a fearless spider-and-moth terminator and resist the allure of all-day Friends on a Saturday to win the heart of yonder lady. The harshest part has to be the ban on romantic actuarial jokes, but presumably it does not stretch to those mathematical chat-up lines that we all groan at but secretly enjoy - 'we' being actuaries, not women, that is.


Let me be your integral

All things considered, though, it's looking good right now for actuaries and romance. And who knows what the future holds! If we can raise the profile of actuaries everywhere, think what could be achieved. Useful side effects might include having to deal less with "You're an actor?" at dinner parties; attracting more bright young students to the profession; and potentially gaining access to more new areas of actuarial work. Obviously, those are just a bonus.

If all this talk of enhanced passion in the life of an actuary is making you all enthusiastic about spreading the word, I suggest checking out the volunteering page of the Profession's website. A few of the roles focus on raising awareness, particularly for young people considering career paths. It might even lead to networking opportunities and CV enhancement. Either way, it can only end well, right?

Anyway, must dash - time to clear my desk to make way for flowers, cards and chocolates. I am an actuarial student, after all.