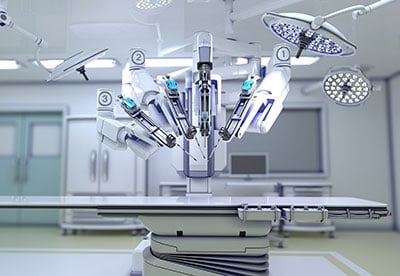 Once considered a far-fetched science fiction notion, robotics is now being used in the medical arena, offering transformative potential in patient care, prostheses and surgery.

The proliferation of surgical robotics offers many cost- and precision-related advantages, but it also gives rise to increased risks and implications for the insurance and regulation of multiple stakeholders associated with the medical industry.

Care robots assist ageing populations and the disabled, while innovations in robotic prostheses enable the replacement of human body parts lost to injury. However, the risk aspect of robotic-assisted surgery (RAS) is having the most transformative impact on the medical sector.

RAS devices allow the surgeon to use computer and software technology to control and direct surgical instruments through minimally invasive surgery for a wide range of surgical procedures.

Evidence suggests RAS is safer compared to traditional methods; and technological advances have enabled a step change in the services, such as imaging and data analytics, which will support the next generation of RAS systems. Grand View Research, Inc. estimated the surgical robotics market to be worth $2.8bn in 2016 and grow to $5.8bn in 2022, reflecting increased demand for expensive, minimally invasive RAS procedures

RAS is being enthusiastically adopted by patients, their doctors and hospitals, particularly in the U.S. But the proliferation of RAS gives rise to a new risk: patients could be harmed by a robotic device independently of actions taken by the surgeon.

Between January 2000 and December 2013 there were 144 deaths, 1,391 patient injuries and 8,061 device malfunctions associated with robotic systems used in minimally invasive surgery. When a product develops a fault, device makers face the risks of product liability claims; this is commonplace in the medical device industry. Products may also experience component ageing, errors or other performance problems which could lead to product liability claims.

The efficacy of RAS largely depends on the skill of the surgeon operating. For the most part, RAS is safe and effective, provided that it is used appropriately and with adequate training. But what is considered best practice when it comes to surgeon training?

Regulatory authorities such as the FDA do not regulate the practice of medicine and therefore do not supervise or provide accreditation for surgeon training related to legally marketed medical devices. Rather, manufacturers, physicians and health care facilities are responsible for training, development and implementation.

In Europe, RAS systems are classified as a Class IIb medical device, with corresponding strict controls on their safety. But like the U.S., there is an absence of legislation governing the training requirements of surgeons operating RAS systems. There are currently no restrictions on the use of RAS systems and surgeons are able to use them as they see fit.

The Robolaw project — established by the European Commission in 2012 and completed in 2014 — had the objective of creating guidelines for emerging technologies such as surgical robotics. The report highlighted the current problem:

“When human beings act without using technologies, it is sometimes hard enough to determine who is responsible for what. The introduction of [technology] artifacts makes things even more complicated.”

The Robolaw project recommended that surgeons meet professional requirements for training in robotic surgery. But for the time being, there is no guidance in relation to the amount of training surgeons must have. So who would be liable in the event of a procedure error involving surgical robotics? The existing regulatory framework does not fully resolve this question. As a result, multiple parties in health care — doctors, device manufacturers and hospitals — all bear a risk.

Operating RAS systems requires surgeons to undergo extensive training. With procedure volumes set to grow, the a risk is that a larger volume of surgeries will be performed by surgeons with inadequate training, increasing the risk of adverse events occurring. There have been cases of surgeons facing malpractice lawsuits, the allegation being that the actions of inadequately trained surgeons have caused death.

Hospitals themselves are responsible for ensuring that surgeons have adequate training when using RAS devices. Hospitals also decide if a surgery will be performed using robotic surgery and which patients are eligible for surgery.

There are many reasons why a RAS procedure could go amiss, and the absence of legislation or guidelines on the best practice exposes multiple parties to risk.

Robotic surgery systems are an expensive purchase, often costing over $2M once maintenance and service fees are factored in. So who pays for RAS?

Health systems differ widely between countries and so does their willingness to pay for expensive RAS procedures. Countries with publicly funded health care models might be hard pressed financially and unenthusiastic about paying for RAS systems.

If manufacturers can’t get paid for their products, then procedure numbers may be limited. Manufacturers of robotic systems invest significant funds in commercialising their devices, but if they have difficulty marketing their product it could undermine their viability.

How disruptive will RAS prove to be and could they replace surgeons altogether?

At present, robotic devices augment the role of surgeons rather than displace them by eliminating hand tremors, for example. And RAS systems can’t perform surgery without direct human control.

However, robots are being developed with greater autonomy, reducing the need for surgeons to deliver interventions. British think-tank, Reform, points out that such autonomous robots as the Smart Tissue Autonomous Robot (STAR) have already outperformed human surgeons in routine procedures such as keyhole surgery. Additionally, robots currently being developed by medical device companies are expected to involve machine learning, and future robots are likely to significantly reduce the human factor and increase robot dexterity.

Although automation is increasing, surgeons are not going to disappear overnight. Surgeons will never be removed completely and there is no substitute for their knowledge and accumulated expertise over many years of practice. Ultimately, the surgeon will always be the one in control and will direct the robot to make the decisions. Regulation for RAS has struggled to keep up with technological developments, and the lack of legislation or guidelines on the best practice exposes multiple parties to risk. With the use of robots likely to proliferate in medical settings, the insurance and legal sector will need to keep abreast of the myriad risks that arise with the adoption of RAS systems.

Tom Srail is a technology, media, and telecom industry leader at Willis Towers Watson, US