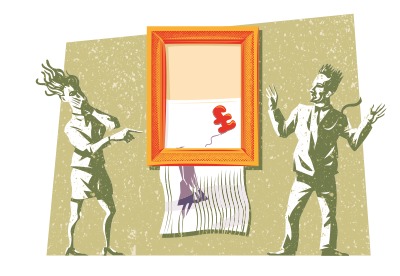 On 5 October 2018 the world witnessed a spectacular event - the transformation of an artwork during its own auction. Just after Banksy's Girl with Balloon was sold for £1.042m, it (partially) shredded itself to become Love is in the Bin - an entirely new artwork, probably twice the value of the original.

Through this destruction of an expensive piece of art, in a room full of people who had just fought over it, Banksy - an anonymous political activist and graffiti artist - started a discussion on whether art was only for investment. However, in doing so, he unwittingly made the piece one of the best investments in art.

One of the most important things contributing to the value of an artwork is its provenance - its story. One need look no further than the painting White Center (Yellow, Pink and Lavender on Rose), commonly referred to as the Rockefeller Rothko, which was, at the time, the most expensive post-war work of art when it was sold at auction for £72.84m in 2007 - thanks in part to its association with billionaire art collector and banker David Rockefeller. Banksy's Love is in the Bin will need no introduction for decades to come. The work is a moment frozen in time; it tells a story in a single frame, and was both created and destroyed by Banksy himself.

The anonymous buyer most probably had a specialist fine art insurance policy covering 'automatic acquisitions', that is, the insurance policy covered the work as soon as the Sotheby's gavel bang confirmed that the painting had changed hands. Usually, following damage to an artwork, one would expect its value to depreciate, allowing one to file a claim. In this case the value has increased, so no such claim has arisen.

This is obviously contingent on the fact that the damage was caused by an external agent's deliberate actions, without prior knowledge of the owner. Had the damage been more extensive - if the painting had been turned into confetti, for example - a claim for the painting would have probably been paid out.

Banksy's video about the incident ends with the artist stating that "in rehearsals, it worked every time" and shows a practice painting being completely destroyed. Had the shredder worked properly and the entire painting been destroyed, would the world have accepted the resulting strips of paper as a new artwork? What would have been its value? One could argue that if the painting had been completely shredded, the owner could have simply put the resulting strips in the same frame to create a vertically fractured work. Its value would have been higher than before - but perhaps not as high as it is now.

If you were to try to pinpoint the reason for the work's value doubling, it would probably come down to the publicity surrounding the incident. The video went viral and was seen by millions of people, many of whom would be willing to pay to own this iconic piece of art history. What would have happened if the shredder suffered a mechanical fault causing it to activate at a later time and date, without cameras present? The work's value would have been in serious question. There would be no video, no publicity and probably no appreciation in value. If the owner were to have filed a claim under these circumstances, would it have been excluded under mechanical fault, or would the insurer have paid?

The very fact that the shredder worked when it was supposed to and suffered a fault midway that led to the painting still hanging from the frame, and that the whole incident was caught on tape, surely allowed the insurers to breathe easy.

What about the insurance of other Banksy works, though? How will this incident affect their premiums and value? As the painting's value has increased, so has Banksy's; his works are probably more valuable than they were before the incident, even though they haven't been shredded.

In the future, insurers may decide to X-ray such works for hidden contraptions before insuring them, and new works could definitely face higher premiums given the risks of Banksy-style creative destruction.