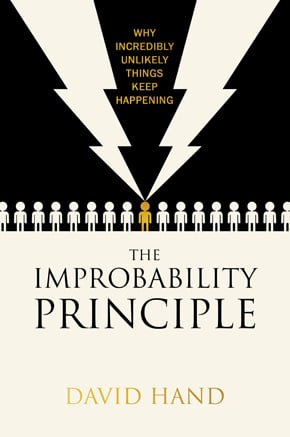 Bookshop browsers will have noticed the emergence of a completely new section over the past few years - 'smarter thinking'. The shelves are the habitat of books such as those by Kahneman - Thinking Fast and Slow, Taleb - The Black Swan, and Malcolm Gladwell - Outliers, The Tipping Point. These books generally take an unusual and interesting subject, and shed new insights on its underlying dynamics.

The choice of subject is clearly key to the success of the bestsellers mentioned above, but a major contribution is made by the atmosphere generated by the authors: the reader feels brought into a small group of 'illuminati', where only a few well-informed initiates know the secrets unveiled on those gilded pages. There is a subtle and constant flattering of the reader's intelligence.

The Improbability Principle by David Hand, emeritus professor of mathematics at Imperial College, is a recent addition to this range of books.

Its primary objective is to demonstrate that incredibly improbable events happen much more often than would intuitively seem likely.

Hand explains this by setting out five laws related to probability. He starts with the "law of inevitability, or "something must happen". For instance, somebody - not previously specified - will win a particular lottery. Next is the "law of truly large numbers". Given enough opportunities, something apparently extraordinary is likely to happen, such as somebody winning a lottery twice.

Then we have the "law of selection", whereby retro-fitting your analysis completely distorts the apparent likelihood of the event - for instance, the selection bias involved in publishing the results of pharmaceutical trials.

The "law of the probability lever" deals with how slight changes to circumstances can have disproportionately large consequences, especially where the assumed independence of events is violated - as in, for instance, the heart-rending case of Sally Clarke's imprisonment for her sons' cot-deaths. Finally, the "law of near enough" considers the assumed equality of very slightly different events.

Hand generally writes clearly, but his explanations are, understandably, aimed at those with little mathematical knowledge. Most readers of The Actuary will find this assumed starting point irritatingly low. Much of the material in the book consists of examples of Hand's various 'laws', for example, cases involving the same set of winning lottery numbers reappearing, or individuals hit by lightning more than once.

Of all the incidents described, the most astonishing is that recounted in the first page of the book. In the summer of 1972, the actor Anthony Hopkins was signed to play a leading role in a film based on George Feifer's novel The Girl from Petrovka, so he travelled to London to buy a copy of the book. Unfortunately, none of the main London bookshops had a copy. Then, on his way home, waiting for an underground train at Leicester Square tube station, he saw a discarded book lying on the seat next to him. It was a copy of The Girl from Petrovka.

As if that was not coincidence enough, more was to follow. Later, when he had a chance to meet the author, Hopkins told him about this strange occurrence. Feifer was interested. He said that in November 1971 he had lent a friend a copy of the book, but his friend had lost the copy in Bayswater, London. A quick check of the annotations in the copy Hopkins had found showed that it was the very same copy that Feifer's friend had mislaid.

After this incredible story, all the subsequent coincidences related feel rather humdrum. For instance, the book's epilogue - which is not really an epilogue, but simply a three-page summary of the whole work - provides as a supposedly extraordinary coincidence, somebody drawing the letters of their surname in a game of scrabble (what is the opposite of OMG?). The Improbability Principle unfortunately shares one other characteristic of many 'smarter thinking' books - by the end, it leaves the reader, at least this one, thinking little more than 'so what?'.

Matthew Edwards is a senior consultant at Towers Watson