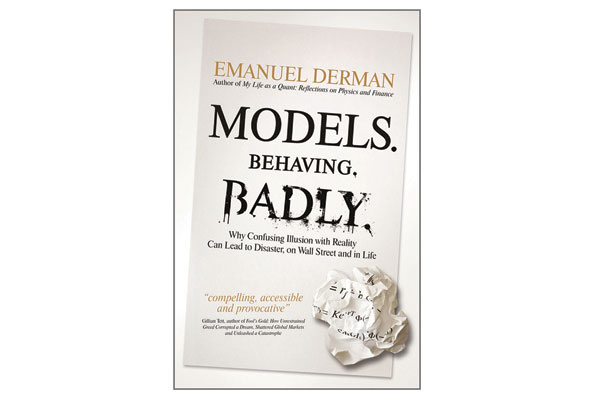 Emanuel Derman's book presents an extremely varied, thought-provoking walk through the field of modelling. The subtitle - 'Why confusing illusion with reality can lead to disaster on Wall Street and in Life' - summarises exactly what the author seeks to explain.

The book falls into three sections: first, a concise consideration of the difference between models and theories; a long and meandering middle relating to politics, philosophy and physics; and the final third, in which the author journeys to the heart of our modelling darkness and offers, if not a health restorative, at least some useful health warnings.

In his explanation of how he distinguishes between a theory and a model - a distinction central to his thesis - Derman defines a theory essentially as a description that relates to real principles. Theories, he says, "stand on their own two feet", while models "stand on someone else's feet" - "they are metaphors that compare the object of their attention to something else... resemblance is always partial'.

The book then takes the reader through a series of interesting if sometimes exasperating digressions, covering Zionism, apartheid, philosophy, theology, the author's eye problem and Maxwell's electromagnetic theories. These comprise a rather incoherent ramble, but what I see as the most interesting thread - the analogy between the human attempt to comprehend the divine and the modeller's attempt to comprehend reality - is left largely untouched.

The final third offers a reward for readers with endurance. The penultimate chapter considers the problems afflicting one of the central models of the financial world, the efficient market hypothesis (or model, as Derman calls it). The problem here is that this operates in a domain where there are no real theories, because there is no natural law to describe by-theories. In such a domain, the modeller is doomed to failure: the EMH is "only a model. It's how we choose to imagine the way changes in stock prices occur, not what actually happens".

In the final chapter, Derman distils his thoughts about models and modelling. He notes that models, despite their many problems, perform important tasks for us, and then sets out his proposals on how best to traverse the modelling minefield. The primary instruction here is to avoid unwarranted axiomisation - or the enshrining of inappropriate assumptions at the heart of our models. "Every financial axiom is pretty much wrong: the most relevant questions in creating a model are how wrong and in what way," he says.

Like the models Derman impugns, the book is useful and rewarding in places, flawed and exasperating in others.

Matthew Edwards is a former editor of The Actuary. He works for Ernst & Young's life insurance practice.


If you are interested in reviewing a business title, please contact Sharon Maguire, managing editor of The Actuary, at
[email protected]
This article appeared in our April 2012 issue of The Actuary.
Click here to view this issue
Filed in
04
Topics
Modelling/software