Arts: The power of poetry 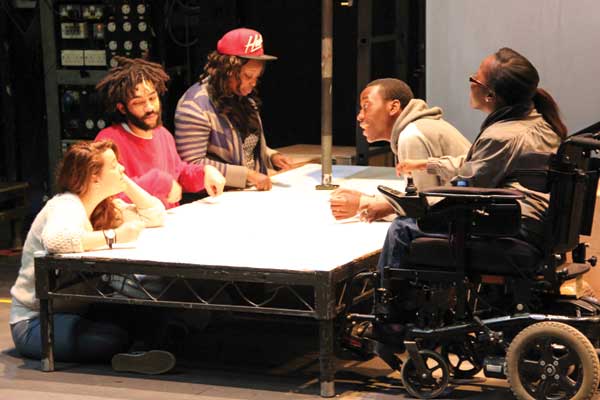 This theatrical performance had been advertised as "transforming personal stories into a dynamic explosion of words, music and movement" and "a night of lip-smacking, jaw-dropping, tongue-twisting spoken word". Such assertions left me intrigued. There was only one way to verify them and so I found myself in the audience.

The opening recital, graphically yet tenderly describing the aftermath of a stabbing incident, established that these young poets meant business and that, despite their age, were able to tackle such intense themes. This  bold poem ensured that the audience was absorbed from the outset.

Various themes were to follow, with the content and delivery ranging from the comical to the profound. Topics included: the media, with a repeated chorus of "The media is the minds of the few influencing the minds of the many"; culture and heritage, including a powerful delivery on slavery; a poignant rendition on abortion; humorous takes on bus and tube journeys in London and the impersonal, impassive nature of commuters; and an alternative view of everyday objects, such as phones and keys.

This was a thoroughly enjoyable show and the poets, their poetry and their performances proved both cleverly creative and creatively clever.

Poetry Unites
The Forum for European Philosophy and the London School of Economics' (LSE) department of philosophy, logic and scientific method sponsored the Poetry Unites event as part of the LSE Literary Festival 2012.

The event's title is taken from the Poetry Unites - My Favourite Poem project, brainchild of Ewa Zadrzynska, journalist, writer and film-maker. This project consists of several five-minute film clips, with the protagonist in each being a poetry fan conveying aspects of his or her life using a favourite poem as a medium in guiding the narrative.

Zadrzynska showed a few of her film clips, which offered fascinating insights into the lives of the participants, including a nine-year-old Polish schoolgirl and a Rwandan refugee now living in France.

Philip Gross, poet, writer and professor of creative writing at Glamorgan University, read some of his work, showcasing a charming film, the visual interpretation of his poem Room Inside, chosen for the 2010 National Poetry Day campaign.

The finale of the event was a poetry 'slam' - a live, high-energy, interactive stand-up competition - organised by past winner Sam Berkson. Other previous winners were also present. These artists included a rapper-turned-poet, who hip-hopped his way into the top three, while the winner was past London and UK slam champion, Keith Jarrett.

Performance poetry may not have the largest fan base, nor be an obvious choice for an evening out, but it is certainly something I would recommend for an inspiring and enjoyable experience.

Sonal Shah is a general insurance actuary working as an independent consultant on Solvency II IMAP and documentation.
This article appeared in our April 2012 issue of The Actuary.
Click here to view this issue
Filed in
04