Book review: The End of Growth by Richard Heinberg 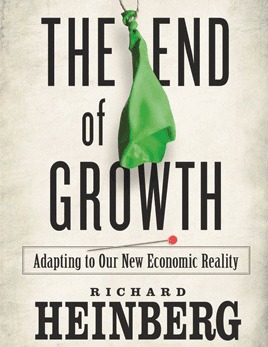 I had dinner recently with a man who does confidence tricks. He asked me why companies were so obsessed with growth. I suggested he compare not just corporations but entire economies with one of the more famous confidence tricks, attributed to Charles Ponzi. This comparison receives a clear and analytical treatment in The End of Growth.

This treatment illustrates two features of the book that make it quite compelling: bringing together thinking that many politicians would regard as 'unthinkable' with empirical evidence from the ongoing economic crisis; and a narrative style that makes the book itself an entertaining (if mostly frightening) read.

The focal point of the book is in chapters 3 and 4. This begins with a summary of the natural limits to continually increasing consumption - oil and climate change bookending an assessment of our reliance on essentials such as water and minerals.

Heinberg then considers the applicability of traditional economic theories for how society reacts to increasing scarcity of specific resources: substitution, efficiency and technological progress. The implications of the second law of thermodynamics for the likely failure of these tools in extremis come out very clearly.

Incidentally, Heinberg refers to a number of natural 'laws' to illustrate some of his key points, including aspects of population theory (sooner or later, we will contrive a way to reduce our own numbers), Moore's law and even Murphy's law.

Returning to the Ponzi scheme, the first two chapters of the book discuss relevant economic history up to the rapid increase in leverage, leaving us where we are today. Heinberg uses examples of financial instruments sparingly to bring out the key point that much historical economic growth is illusory. Via a simple comparison with other famous bubbles, he leads to a frightening description of governments' (doomed) attempts to prevent the bubble from bursting, and considers scenarios for how this might play out.

Chapter 5 brings all this together as raw material for a discussion of relative growth, competition for resources and distribution of wealth within a finite system. Suffice it to say, the core scenario is not a nice cosy image of people sharing happily

Heinberg draws to a more positive close. Chapter 6 covers some ways we might address the financial bubble, as well as political and psychological barriers to these. Chapter 7 talks about some real examples of communities trying to live in a manner that might suit a 'post-growth' world. This leaves the reader feeling that, while this may work on a micro-scale within the current system, the approach may not suit a global population of 7-8bn, even if we adjust our expectations of what we need to consume for a comfortable, healthy and happy life.

Sceptic or believer: read this book. There are lots of individual nuggets to stimulate thinking. For those of us concerned with risk or strategy in businesses that rely on investment, at the very least the book contains some plausible scenarios to consider.

This article appeared in our March 2012 issue of The Actuary.
Click here to view this issue
Filed in
03