Arts: Money at the movies 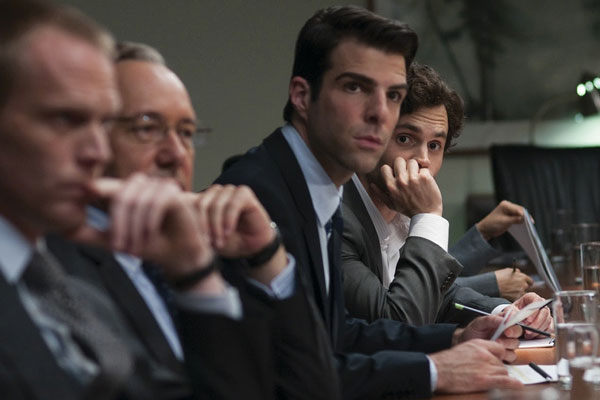 Here's a fact to make you feel old: later this year, Oliver Stone's Wall Street will celebrate its 25th anniversary. That it has remained the definitive cinematic portrait of capitalist excess perhaps says as much about Hollywood's reluctance to tackle complex subjects and the average film-goer's low boredom threshold where numbers are concerned, as it does about the (undoubted) strength of the movie. Finally though, Wall Street has a challenger.

Arriving in the UK earlier this year on a crest of glowing US reviews, the star-studded Margin Call tells the story of an investment bank that finds itself in the same potentially catastrophic position as Lehman Brothers in 2008. The film is the feature-length debut of J C Chandor, whose father spent 35 years working for Merrill Lynch. Similarly, Stone's father was a successful stockbroker and, as you might expect, there are also a few parallels between Wall Street and Margin Call.

One of the fun things to look at in financial films is how the writers attempt to explain relatively esoteric ideas to a general audience. Wall Street takes an impressionistic approach to the task, with rapid shots of data-filled computer screens, paper order slips, people waving their hands frantically and yelling things like "Three-eight top!", all while the stock-ticker keeps you updated as to what's going up or down.

Margin Call cheats a little when it comes to explaining the hard stuff. The film initially focuses on a junior analyst who uncovers some troubling figures and, as the crisis unfolds, it introduces increasingly senior managers, each one apparently more clueless about the company's finances than the previous one. Jeremy Irons' CEO stops short of winking at the camera when he urges the young analyst to "speak as you might to a young child or a golden retriever".

The critique of capitalism inherent in both films comes down to two ideas. The first is a distaste for 'survival of the fittest' as applied to the business world. In Wall Street, Gordon Gekko (Michael Douglas) is depicted as a wolf; he speaks approvingly of sheep being slaughtered, verbally threatens to rip out throats and - most chillingly - feasts on steak tartare. In a central scene, Gekko claims that greed is good because (among other things) it "captures the essence of the evolutionary spirit".

Near the start of Margin Call, manager Sam Rogers (Kevin Spacey) ruthlessly presents the sacking of 20% of the workforce as an opportunity for the remaining employees to get one step closer to their bosses' jobs.

Later, defending his decision to offload toxic assets, Irons' CEO asserts: "We are selling to willing buyers at the current fair market price. So that we may survive." As in Wall Street, to succeed you must be prepared to draw blood.

The second idea is that the tangible is preferable to the intangible. In Stone's film, Bud Fox (Charlie Sheen) has rejected the profession of his machinist father, Carl (Martin Sheen), eyeing a shortcut to the top via the stock market. At the end of the film, Carl is advising his disgraced son to "create, instead of living off the buying and selling of others".

Eric Dale (Stanley Tucci) is the closest thing Margin Call has to a good guy. After losing his job with the investment bank, Dale fondly recalls his previous career as an engineer with the notion that the bridge he helped to build made a tangible - and permanent - improvement to the lives of thousands of people.

So does Margin Call eclipse its predecessor? Well, yes and no. Wall Street is unquestionably more straightforwardly entertaining. Indeed, it's unsurprising that not everyone found Gekko as repellent as Stone intended; Douglas later said that many stockbrokers thanked him for providing them with the inspiration to enter the profession. And who wouldn't want to don a pair of red braces and say things as gloriously silly as: "Wait till it heads south, then we raise the sperm count on the deal"?

Glamourising the financial world is not something Chandor can be accused of. His film takes a cooler look at the multiple interpretations of the right thing to do in extreme situations, challenging the viewer to consider how they would have acted differently. As Lou Mannheim (Hal Holbrook), the moral heart of Wall Street, says: "The main thing about money, Bud, it makes you do things you don't want to do."

This article appeared in our March 2012 issue of The Actuary.
Click here to view this issue
Filed in
03
Topics
Soft skills