Former arts editor Alan Frost updates us on his activities since becoming High Sheriff of Dorset. 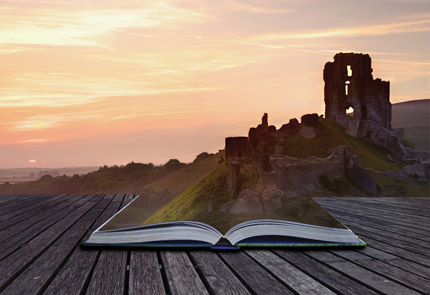 My usual cultural excursions have been somewhat curtailed because of shrieval duties in Dorset. By way of compensation, I have enjoyed some unexpected pleasures in many parts of the county. Civic services in towns as diverse as Poole and Shaftesbury have allowed me to see fine ecclesiastical architecture, which is a legacy to be treasured.

On the River Frome in Wareham, Lady St Mary Church standing next to the excellent Priory Hotel, dates from Norman times and was originally part of the Priory complex. Apparently, a fine Roman mosaic lies buried ?underneath the church floor, lost for now except as a memory. The south chapel ?with 13th century vaulting is dedicated to St Edward, who was martyred at ?Corfe Castle in 978 and whose death led to the ceremony of the Loving Cup practiced to this day at Livery Dinners in the City of London. A fine new West window has just been installed.

At Corfe Castle itself, via the opening of Purbeck Art Weeks Festival, the Bournemouth Symphony Orchestra (BSO) Symphonic Brass quintet joined forces with two Purbeck-based brass groups and performed a new work composed by Stephen McNeff. The Chalk Legends project is the 2012 BSO project timed to coincide with the Olympic sailing at Weymouth next year. Also playing at Corfe was a local folk group called ?Fippeny Piece who sang their latest hit called 'The Olympics are coming to Dorset', which is furnished with a sing-along chorus and, after a few glasses of wine, holds a certain amount of rustic charm.

I have become a frequent user of the Dorchester bypass because the county town has featured heavily in my diary. There, I have visited the prison, sat in the crown court with the presiding judge, found several new watering holes and also the lovely Church of St Peter's, which dates back to 1454 and has associations with Thomas Hardy. Note that there are ?three Thomas Hardy's of note in Dorset. Apart from the writer there is Vice-Admiral Sir Thomas ("kiss me") Hardy, Flag-Captain of HMS Victory at the Battle of Trafalgar whose monument was erected in Dorset in 1844; and there is Thomas Hardye, who founded the first free school in Dorchester in 1569 and whose life is commemorated on a wall plaque in St Peter's Church, Dorchester. I attended choral evensong especially to hear the Thomas Hardye School Choir sing Sir Hubert Parry's 'I was Glad' and very thrilling it was, too.

Parry was born in Bournemouth in 1848 when it was a little village of around 600 people. His parents and in-laws insisted upon a commercial career and he ?became an ?insurance underwriter at Lloyd's. ?Thankfully, he persevered with his music. Did you know he wrote Jerusalem in 1916 for the suffragette movement? I heard his setting of Psalm 122 more recently at ?Christchurch Priory in a mixed bill including Bruckner's motets. Locus iste is sublime and I love Os justi, which is set in the haunting Lydian mode  in keyboard terms, just the white notes.

I did manage to attend the BSO Prom at the Royal Albert Hall and enjoyed seeing Gliere's unusual Concerto for Coloratura Soprano as well as a magnificent Rachmaninov Symphony No. 2 conducted by Kirill Karabits. A very uplifting occasion and I was glad to be there.

With the nights getting longer and darker and summer now a distant memory, here are five horror flicks to check out over the approaching Halloween holiday.

Deborah Kerr falls foul of a pair of creepy kids in this British horror based on Henry James' The Turn of the Screw.

This influential slasher movie is all the eerier for its refusal to show the killer or provide any sort of motive for his grisly actions.

Perhaps one of the finest examples of a film designed to terrify, ?this infamous public information short was once routinely inflicted upon schoolchildren. Directed by the late John Mackenzie ?(The Long Good Friday), the film was meant to highlight the perils of playing on farms; it did this by having several children die in increasingly horrific ways.

Inspired by a Japanese folk tale, this superior chiller boasts one of the most unsettling  and by now one of the most iconic  images in the history of the horror genre.