Books: The Trouble with Markets

Overview of 'The Trouble with Markets: saving capitalism from itself' by Roger Bootle 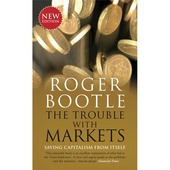 In Free Capital, written by actuary and investor Guy Thomas, describes the backgrounds and circumstances of ?12 relatively low profile full-time private investors. The 12 millionaire investors  all of whom are male  boast enviable investment track records. All but one of the investors specialises in smaller companies. Of course, the author targeted such people  there is no corresponding analysis of unsuccessful investors.

The investors have different backgrounds, qualifications, skills and personalities. The move from conventional employment to full-time investment was not always entirely voluntary  ?several faced challenges in terms of illness, disability or redundancy. The book does a good job in comparing how this impacted the paths the investors took.

Both author and most interviewees readily admit the role that luck can play in achieving excellent investment returns. For several investors, the early years were often not great  one forms the impression they were effectively paying to develop investment skill  but several of the investors benefited early on from '10-baggers' (stocks that rise by 10 times the purchase price or more).

Each chapter contains an interview with an investor, interspersed with the author's observations, and ends with a summary headed 'Insights and Advice'. The summary provides a brief reminder of the investor's approach  the book is worth buying for these alone.

Many of the investors share common traits, including a desire to work things through themselves and valuing wealth more for freedom than prestige  none want to return to being 'wage slaves'.

I was particularly struck by the investors' ability to explain their investment approach, relating it to their skills. They know their competitive advantage and tend not to stray from their favoured ground. Failing this, it is all too easy to move from being a 'value investor' to favouring a 'momentum' approach, buying high and selling low.

Free Capital is excellent storytelling but, more importantly, covers material that you will struggle to find elsewhere. There are many deeper aspects that also make Free Capital noteworthy. ?One example is the idea of holding a variety of smaller companies more for liquidity than diversification. Another example is the Kelly criterion, which will be known to some. ?Free Capital prompted me to delve ?deeper regarding potential asset allocation applications.

I suspect that Guy Thomas has much more he could tell us. Two articles  'Diamonds and flower bulbs' and ?'How many shares should an investor hold?' from his blog give a fascinating insight into the author's approach.

From a personal perspective, I would have appreciated more on the mechanics of investing in smaller companies  ?bid-offer management, for example. ?To be fair, this was never the author's aim  the introduction clearly states that ?Free Capital is not a 'how to' book. Even so, there are plenty of exploitable concepts for those with the stomach for the work. This applies to the technical ideas  Kelly, and so on  and some more obviously practical elements.

'Vernon' uses a three-tier framework when considering whether to buy  a core thesis, secondary factors and hygiene factors  illustrated by a ?real investment. Another example is that 'Bill' uses a 'value spider', which takes into account 16 metrics. With those hints we might try to mimic those investors and work the rest out for ourselves.

My recommendation is that if this thought-provoking book is not worth £10 or so of your money, then I don't know what is. All author royalties go to charity, so join me in making 2012 the year you finally get your investments  and your investment strategy  into shape.

Andrew Howe is director of risk management at Lucida plc

In the early months of 2010, The Actuary printed a review of Roger Bootle's ?work of crisis literature, The Trouble with Markets. The book was described as ?"lucid and fascinating" by its reviewer, Andrew Tjaardstra of Professional Broking. This October it was re-released in paperback with a substantial amount of new material added, all pertaining to the current financial crisis or, more accurately, the one that is now becoming apparent.

In the first iteration of The Trouble with Markets, Bootle began his book by describing the background to, and deep causes of, the first of the current crop of financial crises back in 2008, a combination of "greedy bankers and naïve borrowers, mistaken central banks and inept regulators, insatiable western consumers and over-thrifty Chinese savers". Offering a balanced critique of the free-market system that first engendered the meltdown, Bootle outlined both the positives (the relatively even distribution of benefits across the country) and the glaring negatives (monopoly and insecurity; self-serving, unwieldy financial institutions and an increased propensity for immoral decision-making in the boardroom). A rare thing for a Square Mile ?insider. This was then followed by a considered appraisal of the crisis as it stood at the time of writing, of quantitative easing in times of great need (his verdict: not a bad thing), analysis of the new economic status quo  looking at the rise of China and their investment in the west alongside other super-saving Asian countries  and a reckoning of the financial sector as a whole, one in which he suggested dramatic reform as a possible way out of deadlock.

Now, two years later, Bootle expands on his original thesis with a wealth of new material, examining, among other things, the apparent fragility of the Euro, the Vickers report and other major events encountered along the road from the last financial crisis. It is to sovereign debt, though, that he devotes a major part of his work, almost 30 pages of new content wherein he looks at the geography of the phenomenon from its naissance in government support of an ailing banking system through the crisis of public finance we're in today, to the impending Greek default. When looking at instances of past default and the immediate aftermaths thereof, he cites not just Argentina and Russia, but calls on a whole host of examples spread across two centuries to make his case  each nation having something different to show for having once been unable to pay their debts.

Though he is quick to point out that we arrived here "less by luck than by judgment" and blames governments for having been "blithely insouciant" in the face of mammoth public-sector debt, Bootle's inquiry is marked in its cool temper and control. There is also a lesson to be learned in his assertion that "default is not only about what is possible, but also what is desirable". In some cases, it is greatly so. One is reminded of Mario Blejer, who ?managed Argentina's central bank in the aftermath of the world's largest default, and his statement that "Greece should default, and default big. A small default is worse than a big default and also worse than no default."?