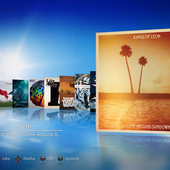 With Christmas almost upon us, many of you will be preparing to return to the family home, laden with gifts. If your family is anything like mine, then you've probably long given up on the lofty ambition of buying them presents of genuine artistic quality, in favour of the tried-and-tested approach of getting ?them items they might actually enjoy. Gifts completely wasted on my relatives include Sufjan Stevens' Seven Swans album, a Pan's Labyrinth DVD, and John Updike's Of The Farm (admittedly not his best novel, though it surely possesses more virtues than the solitary one allowed it by my aunt: brevity). So as you race through this article, eager to discover what unmissable things you've contrived to miss in 2011, promise me this  keep them to yourself.

I'll pass reverently over PJ Harvey's Let England Shake as its masterpiece status is by now well documented. Across the Atlantic, it's been a good year for another female singer-songwriter, Leslie Feist. Metals is the Canadian's follow-up to her 2007 effort The Remainder, an album that chiefly owed its popularity to Apple's use of '1234' in an iPod advert. While it does not yield anything so immediate, Metals is a more ambitious and, ultimately, more satisfying album, with songs such as 'Graveyard' and 'Comfort Me' swelling to a rousing finale.

Moving south into America, Bon Iver and Fleet Foxes both managed that rare feat of improving upon an acclaimed debut, veteran rockers Wilco produced their best work in years and R.E.M. reminded us why we used to love them, before calling it a day.

A new Terrence Malick movie is always a big event, but Tree of Life sometimes strayed beyond 'big' into 'overblown'. Nevertheless, Malick remains a visionary filmmaker and there was plenty to admire here, not least his sincerity in producing an intensely personal and unashamedly religious film. Also taking up a spiritual theme was the meditative  quite literally  Of Gods and Men, from French director Xavier Beauvois, which told the remarkable true story of a group of Trappist monks kidnapped during the Algerian civil war.

Drive was an impressive exercise in style from Danish director Nicolas Winding Refn, although I suspect I wasn't alone in finding the violence a little difficult to stomach. In Asif Kapadia's biopic Senna, the foreknowledge of its tragic ending made it no less gripping, even for those  myself included  who don't exactly thrill to the sport.

A beautiful woman in a preposterous plot (and precious little else) was the common factor in Pedro Almodóvar's The Skin I Live In and Julia Leigh's debut Sleeping Beauty. The former drew some uncomfortable laughter from the audience I watched it with, while the sombre tone of the latter precluded any mirth, no matter how bizarre the action got. Neither are films you are likely to forget in a hurry.

Taxes and tedium  it's difficult to imagine a less encouraging premise for a novel. Even if your heart gladdens at the sound of those two Ts, if you were then told that the novel is only one-third finished, I suspect the neon sign flashing 'must read' upon your inner eye might dim somewhat. If you haven't already guessed, I'm talking about David Foster Wallace's posthumously released The Pale King, ?the literary event of the year.

Wallace's suicide in 2008 sent shockwaves throughout the literary landscape, a landscape that his 1996 ?opus Infinite Jest did much to shape. Although he had since published both collections of short stories and non-fiction, The Pale King was the "long thing" that he had been working on for a decade by the time of his death. With the consent of his widow, Karen Green, Wallace's editor Michael Pietsch compiled the 500-page novel from a 250-page manuscript ?along with the content of hard drives, floppy discs and notebooks, publishing it in April of this year.

The Pale King is a more restrained ?book than its predecessor, as well as striking a more overtly moral note  ?the ideas explored by its characters (mostly IRS employees, circa 1985) include individualism versus civic virtue, the value of work and the possibility of authentic heroism. It is also, ostensibly at least, a more personal text  it is difficult to resist connecting the motifs of boredom, isolation and crippling self-consciousness, to the depression that plagued Wallace throughout much of his adult life.

Despite its gravity, The Pale King is a terrifically entertaining and frequently hilarious read. The hallmarks of Wallace's writing  an apparently limitless curiosity, a dedication to capturing the complexity of modern life and a rare generosity of spirit  are on full display here. He was, you sense, a writer who could do just ?about anything. Unfinished as ?it may be, ?The Pale King, above all else, affords an encounter with an extraordinary mind. Tedium has never been so thrilling.