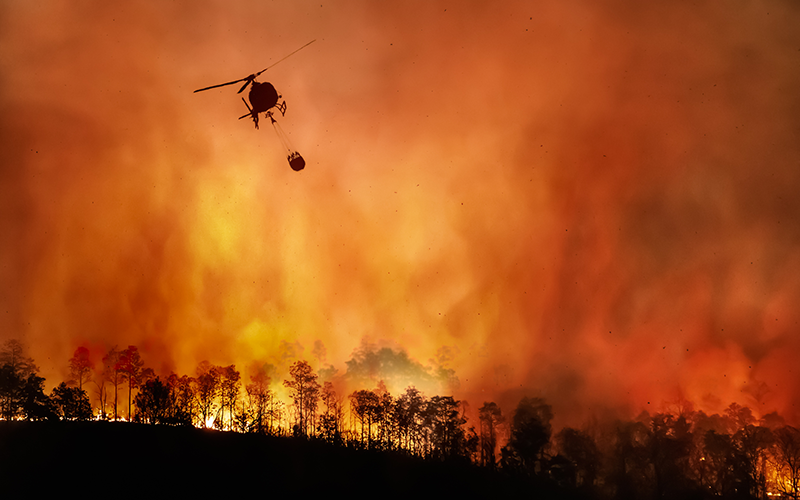 Storms, floods, wildfires and earthquakes destroyed assets worth $280bn (£206bn) last year, which is a third more than the $210bn of losses recorded in 2020, Munich Re has revealed.

Roughly $120bn of losses were insured, up from $82bn in 2020, with the insurance protection gap declining slightly due to higher proportion of losses in the US. However, the gap remains at around 57% globally, and at 90% in poorer countries.

Alongside 2005 and 2011, the year 2021 proved to be the second-costliest ever for the insurance sector, while overall economic losses from natural disasters were the fourth-highest to date.

“The 2021 disaster statistics are striking because some of the extreme weather events are of the kind that are likely to become more frequent or more severe as a result of climate change,” said Ernst Rauch, chief climate and geo scientist at Munich Re.

“For hurricanes, scientists anticipate that the proportion of severe storms and of storms with extreme rainfall will increase because of climate change.

“Even though events cannot automatically be attributed to climate change, analysis of the changes over decades provides plausible indications of a connection with the warming of the atmosphere and the oceans. Adapting to increasing risks due to climate change will be a challenge.”

The US accounted for a very high share of natural disaster losses in 2021, roughly $145bn, of which $85bn was insured. Both overall and insured losses were significantly higher than in the two previous years.

In Europe, torrential rainfall in July 2021 triggered exceptionally severe flooding that caused $54bn of overall losses, of which $40bn was in Germany.

Overall economic losses of $50bn were recorded in the Asia-Pacific region, of which $9bn were insured, with the area accounting for just 18% of overall global losses, and 7% of insured losses.

“The images of natural disasters in 2021 are disturbing,” said Torsten Jeworrek, a member of Munich Re's board of management. “Climate research increasingly confirms that extreme weather has become more likely.