The accounting position of defined benefit (DB) pension schemes at the UK's 350 largest listed companies returned to a deficit at the end of last month as COVID-19 continued to hit the economy. 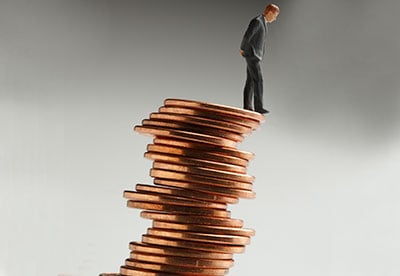 That is according to research from Mercer, which shows that the FTSE 350's DB pension position moved from a surplus of £10bn at the end of March 2020, to a deficit of £52bn on 30 April.

The consultancy firm's findings show that liabilities rose by £102bn to £897bn at the end of April, compared with £795bn at the end of March, while asset values increased by £40bn to £845bn.

Mercer chief actuary Charles Cowling said: “Pension deficits, as measured by accounting rules for company accounts, have not changed much compared to 12 months ago.

“However, pension liabilities as measured by trustees, have jumped as equity markets and interest rates have witnessed record falls.

“It will be a challenging year for actuarial valuations, with any demands from trustees for extra cash likely to be unwelcome as many employers struggle to find the cash to keep their businesses going.”

Mercer’s data relates to about 50% of all UK pension scheme liabilities, and reflects pension deficits calculated using the approach companies have to adopt for their corporate accounts.

The latest figures show continued volatility to accounting positions, reversing what was recorded at the start of the UK's COVID-19 outbreak when assets and liabilities both fell substantially.

Cowling said that The Pensions Regulator (TPR) has a “difficult path to steer” as it encourages trustees to focus on funding improvements while employers suffer with the impact of coronavirus.

“A previous chancellor of the exchequer asked TPR and trustees to consider the growth prospects of companies when reaching agreement on pension contributions,” he continued.

“Now perhaps survival prospects should be the focus ,and so trustees need, more than ever, to understand what level of cash contributions employers can truly afford.

“Echoing words from TPR’s latest statement, in the current environment, we expect the frequency and intensity of trustee monitoring of employers to be increased significantly until covenant visibility and strength is restored.”