An update for November on what our society has been up to... 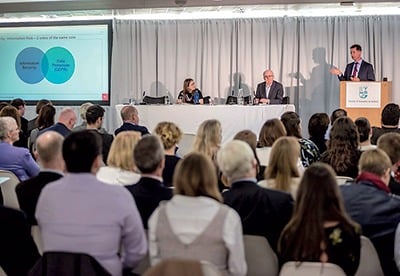 On Friday 11 October, the Society of Actuaries in Ireland (SAI) held its Risk Management Perspectives Conference in the Aviva Stadium, Dublin. Interactive sessions were delivered throughout the day, with more than 200 delegates in attendance.

Group chief economist at the Bank of Ireland, Dr Lorretta O'Sullivan, presented her strong economic growth forecast for the Irish macroeconomic environment, despite an uncertain landscape (Brexit; US and China trade policy disputes). It was seen that net migration and a mismatch in housing supply versus higher demand is contributing to continued pressure in the local housing market. The volatility in the Euro-GBP exchange rate is also being monitored closely. The current low interest rate environment, while welcome for some, also presents its own challenges for banks, insurance companies and pensions.

Paul Harwood, CFO of Holloway Friendly, then shared his insights on defining and managing culture. He presented a useful framework for assessing the culture of an organisation: reward; management; items ignored; powerful person, and qualms of qualms of conscience.

Lukas Ziewar, group chief risk officer at Athora, gave an example of the role of consolidator businesses and the positive role that a CRO has to play in helping to ensure success, while the director of government affairs with Insurance Ireland, Dr Declan Jackson, spoke on how Insurance Ireland, working on behalf of its members, has advocated to ensure emergent risks can be managed and their impact lessened.

Ruairí O'Flynn INED delivered a thought-provoking and engaging discussion on the roles and interdependent activities of actuaries, INEDs and regulators. In his address he confirmed the need for trust in senior management in order for INEDs to exercise their fiduciary duties with any degree of confidence. The use of a metaphor of a 'walled garden' for the actuarial profession and other professions was memorable. Ruairí also recommended that actuaries should study individual and organisational behaviour in the professional examinations, in light of behaviour being a business (operational) risk.

Chief executive and co-founder of Skytek, Dr Sarah Bourke, presented a facilitating talk (in partnership with AON) to offer the insurance and reinsurance industry space ('NASA') adapted software systems that could better manage marine, port cargo and offshore asset risk. Success for Skytek was largely attributed to keeping technical solutions simple and easy to use.

Solvency II, a panel discussion chaired by Joanne Ryan (Acorn Life) with Tony O'Riordan (New Ireland), Jason Wiebe (RGA), Andrew Candland (CBI), reviewed how Solvency II has been working since its introduction. There was consensus that Solvency II has created a much greater awareness of risk at board level. Opportunities to allow for more harmonisation and a refinement in disclosure requirements was also explored by the panel.

The CRO of Davy Group, Grellan O'Kelly, gave an interesting talk on 'Risk management - an investment firm perspective'. He highlighted the overlaps that accountants have with actuaries (dealing with the same 'risk fundamentals'). The importance of de-risking an organisation accordingly was also explored in this session.

Carol Storey, sustainability and climate change actuary at PwC, delivered a presentation titled: 'Climate Change: Are You Ready?'. Carol chairs the IFoA Climate Change Working Party, which published an introductory guide to climate change earlier this year. She focused on the importance of transition risks in moving to a low-carbon economy, given that transition risks are not often considered but are really important for organisations. Increased costal erosion and flooding risks were also highlighted.

Carol confirmed she did her part by taking a seven-hour 'sail and rail' journey from London to Dublin; this reduced her carbon emissions by 73% (as compared to someone travelling by plane). 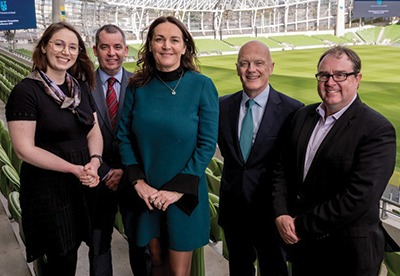 The Worshipful Company of Actuaries welcomes Tan Suee Chieh, president-elect of the IFoA, as its first Visiting Affiliate member. 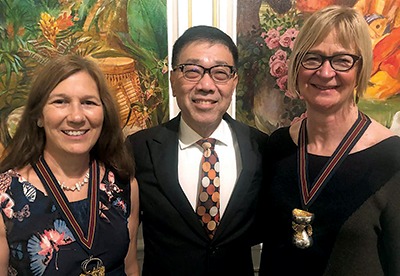 This is a new category of affiliate membership created to enable actuaries who are not based in the UK, but who are regular visitors to the UK or are temporarily seconded to the country, to participate in the social and philanthropic events of the Worshipful Company when they are in London.

Tan Suee Chieh, pictured here with the Master Fiona Morrison and senior warden Julie Griffiths, commented on LinkedIn that in a world of rapid change, it is important that professional bodies and institutions learn how to keep and nourish their rituals and traditions as they seek to reinvent themselves, as such rituals help us in keeping our soul and maintaining a sense of history and continuity.

Any actuary interested in becoming a Visiting Affiliate of the Company is invited to contact the Clerk, Lyndon Jones, at [email protected]

Adam Freeman (Admiral) and his wife Sarah are pleased to announce the birth of their daughter Alice on 30 April. She is little sister to Ava and Ben.

Mr Michael Tyrell, based in the UK, gained fellowship in 1962. Died aged 86

Alan Ford, who played a pivotal role in the sound development of unit-linked business, died in July aged 85.

After attending Brighton Grammar, Alan joined the Prudential and started work on the actuarial examinations. Before completing them, however, he and his new wife Doreen moved to the US, where he became a Fellow of the Society of Actuaries in 1963. They then decided to return to the UK with their two children and he completed his fellowship examinations in 1965.

Alan became finance director and actuary at Abbey Life before moving with the top management team to start Hambro Life, laying solid foundations for the company's rapid progress to listing and membership of the FT Index.

The late 1960s and 1970s was a period of rapid regulatory change following a number of insolvencies and, of course, the UK's membership of the European Community. Throughout the period, Alan was very active within both the industry and Institute, helping to develop sound practices for product design, unit pricing, valuation, DTI returns and financial management generally.

He was the author of a paper, Students' Society on the subject of Assurances Linked to Unit Trusts (1969), which included an explanation of actuarial funding. As a member of Institute working parties, he then wrote Life Office Returns to the Department of Trade and Industry (1973) and was co-author of Valuation of Individual Investment-Linked Policies (1978). Importantly, he was also co-author of the Report of the Maturity Guarantees Working Party (1980), which he chaired.

Alan was very active in both industry and Institute, helping to develop sound practices in product design, unit pricing and more.

Alan was a very practical person and even though he much preferred traditional computational methods for his own work, he had the foresight to sponsor the development of a comprehensive, computer-based model of Hambro Life in the early 1970s and an interactive profit tester. As well as being a good businessman and a very clear thinker, Alan was particularly good at developing people, as those who were lucky enough to work with him will testify.

Alan retired in 1980 to travel, start a helicopter business with his son, playgolf and to spend more time with his devoted family.

This article appeared in our November 2019 issue of The Actuary.
Click here to view this issue
Filed in
11
Also filed in
People & Social News