An update for July on what our society has been up to... 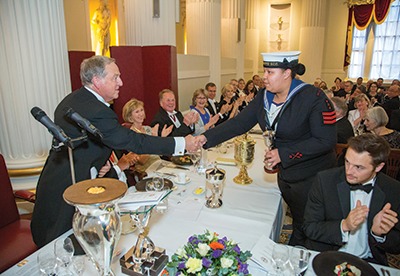 The Worshipful Company of Actuaries was fortunate again
in being able to hold our banquet at Mansion House, in the presence of the Lord Mayor, Alderman Peter Estlin and the Sheriffs on 30 May.

The evening started with the Master presenting awards
to the Edmonton Sea Cadets - the Robert Thomas Memorial Award for Cadet of the Year to Able Cadet Alaysha Brima,
and a cheque for £3,000 to commanding officer
Lt James Clear-Tournas.

A splendid dinner followed and we were entertained by
the Post Horn Gallop, performed by the Royal Marines Association Concert Band. This is always the highlight of the evening!

The Master spoke and liveryman Alan Smith then welcomed our official guests: Air Vice-Marshall Malcolm Brecht, leader of 601 Squadron; the Masters of the Armourers' and Cordwainers' Companies and their wives; the prime warden of the Blacksmiths' Company and his wife; Derek Cribb, chief executive of the IFoA, and his wife; and Sir John Timpson, chairman of the shoe repair chain that bears his name.

Sir John ended the evening with an inspirational speech about his business ethics - in particular the way his company helps and employs those in need.

All in all, a very enjoyable evening in Mansion House's Egyptian Hall.

On 14 May, the Staple Inn Actuarial Society took a trip to the indoor mini-golf experience at Puttshack in Shepherd's Bush. Tee times were staggered from 6pm and space-age technology tracked everyone's ball with some great variations of courses - including bowling, beer pong and darts-themed holes.

The automated scoring meant it was easy for members to enjoy a drink without worrying whether anyone was cheating, or having to write anything down. It was an evening of long iron work, with some solid putting displayed by our members. After all 18 holes were completed, members were treated to canapes and freshly baked pizzas in the bar area before heading home.

Derek Renn was born in Hackney on 16 February 1930, the only son of Frank Edward Renn and Dorothy Elizabeth (née Girling).  He won a scholarship to Queen Elizabeth's Grammar School, Barnet in 1941.  Although conditions were not propitious for taking up a place offered to him at Merton College, Oxford, he was successful in the Civil Service open executive competition in 1948.  In Derek's own words, he was serendipitously allocated to the Government Actuary's Department, where he served for 44 years, retiring in 1992 as senior actuary and establishment officer (head of HR in today's terms).  He was made a CBE in the 1992 Birthday Honours.

Derek had a lifelong interest in archaeology and particularly in Norman castles, which started with a calligraphically handwritten essay on castles that was awarded second place in his school's Librarian's Prize in 1947. He won the British Archaeological Association's Taylor Prize in 1959 for his article on 'the Anglo-Norman keep'. His magnum opus, Norman Castles in Britain, was published in 1968, and remained in print for 20 years.  He also wrote a considerable number of papers (more than 130) for the Antiquaries Journal, Medieval Archaeology and numerous other archaeological journals, as well as several official guides to British castles, such as Pevensey, Kenilworth and Caerphilly.  In 2001 he was awarded the Society Medal of the Society of Antiquaries of London, having served on its Council from 1972-73 and as its treasurer in the 1990s. He completed his PhD - on the development of fortification in England from 1166 to 1216 - with the University of Southampton in 1978.

Derek was a committee member of the Civil Service Insurance Society (CSIS) from 1982 to 2015 and served as a trustee of the related CSIS Charity Fund from 2007 to 2010, following the separation of  the Society and Charity governance structures in 2007. He was a Freeman of the City of London and a liveryman of the Worshipful Company of Actuaries.

Derek was a charming and courteous gentleman, unassuming but highly knowledgeable in his areas of expertise, maintaining throughout his life a strong interest in all matters historical.  He will be remembered by many in different contexts as a delightful colleague. He passed away on 31 May 2019 aged 89 and is fondly remembered by his widow Margaret Ann and by a son and daughter.

This article appeared in our July 2019 issue of The Actuary.
Click here to view this issue
Filed in
07
Also filed in
People & Social News