An update for June on what our society has been up to... 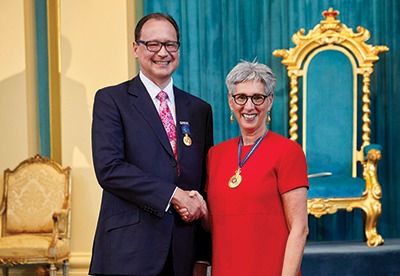 The Governor of Victoria, the Honourable Linda Dessau AC, presented him with the medal at a ceremony on 5 April.

John received first class honours in his mathematics MA at Exeter College, Oxford in 1985, and his first position was as a consulting actuary at Aon. He went on to hold several leadership roles in finance before emigrating to Melbourne, Australia in 2005.

John retired in 2011 and has gone on to help various not-for-profit causes. He is also an independent non-executive director of two finance companies involved in infrastructure projects in Victoria.

"To add to this incredible award, I have just celebrated 10 years since my double lung transplant, which became necessary due to the damaging effects of cystic fibrosis, a genetic disease I was born with," he said, speaking after the award ceremony.

"I am honoured to be recognised for my community volunteering. Australia has been such a lucky country for me, being able to help the causes close to my heart has meant so much. I am also deeply grateful to my donor family. Without their consent to organ donation, I would not be alive today."

This article appeared in our June 2019 issue of The Actuary.
Click here to view this issue
Filed in
06
Also filed in
People & Social News