On Tuesday 5 March, with good-humoured competitive banter and the smell of pancakes in the air, hundreds of Liverymen and members of various Livery Companies, dressed in full regalia, congregated at the Guildhall as curious tourists and office workers looked on. 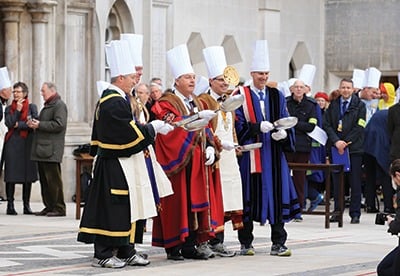 It could only mean one thing: the Inter-Livery Pancake Race.

The weather was sunny and beautiful - very different from the wet day we had last year. This fun event, organised by the Poulters (egg suppliers) employed the skills of a variety of Liveries - the Clockmakers timed it, the Gunmakers fired the starting pistol, the Glovers provided the white gloves worn by racers, the Fruiterers provided lemons and the Cutlers provided the forks.

The Worshipful Company of Actuaries team was there to defend its title. We started well in the Master race, where Nick Salter performed exceptionally in his heat, earning him a place in the finals. Cian Creedon was next in the Liverymen race and showed great sportsmanship.

Next up was Kartina Tahir Thomson, who won her heat in the Ladies race. Finally, Marian Elliott was glorious in her groovy 70s fancy dress, marking the establishment of the Worshipful Company of Actuaries in 1979.

It was a fantastic day enjoyed by many, and while the team didn't win this year, the Actuaries 'won' for the greatest show of support and the loudest cheer in Guildhall Yard.