Actuaries in the top 10 best careers

The actuarial profession is among the top 10 jobs for salary and growth potential, American jobs listing portal CareerCast.com has said.

CareerCast's annual ranking of jobs in terms of their pay and their growth outlook found the field dominated by professions such as actuaries that are based around handling numbers.

Kyle Kensing, online content editor at CareerCast, said: "The collection, interpretation and implementation and even protection of data contribute to some of the best jobs of the year."

They were also found to enjoy a good working environment and low stress levels.

A good education was important to reaping these benefits. "Education is key for most of the top jobs," says Kensing. "Every one of the best jobs of 2019 requires at least an undergraduate degree."

By contrast some 'glamorous' jobs had the worst prospects, including disc jockeys - increasingly redundant due to the automation of services like Spotify - and newspaper reporters due to the decline of print media.

Careercast based its findings on data from the US Bureau of Labor Statistics and reviewed these against four core criteria of environment, income, outlook and stress. 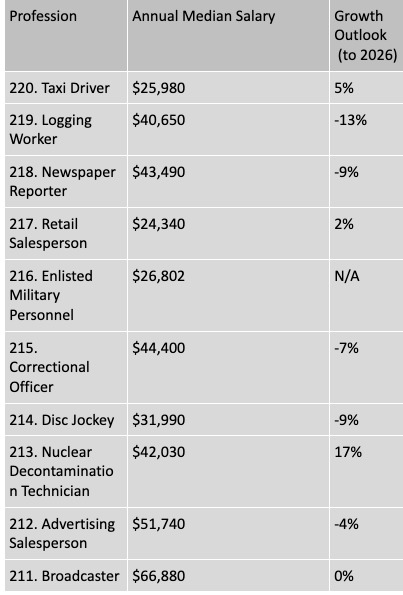