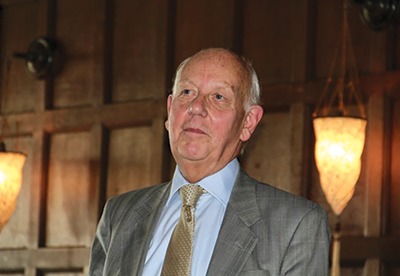 Graham Lockwood, who died on November 28 2018, aged 83, had a long and  successful professional career with Eagle Star, rising to the position of deputy chairman. His retirement gave him the time and opportunity to pursue other interests outside the insurance industry. He served as a local parish councillor in Penn for six years and obtained a first class degree in modern history at the Open University before devoting himself to his lifetime interest in music and the arts.

Graham served as a council member for the Royal Over-Seas League (ROSL), chairing the arts sponsorship committee; under his inspired leadership, it acquired considerable funding for music and arts programmes and for the construction of the Princess Alexandra Hall. He then became a trustee of the Golden Jubilee Trust and of the ROSL Pension Scheme, which he later chaired.

At a celebration of his life held in Cheltenham in March 2019, Cheltenham Music Festival artistic director Alison Balsom said: "I cannot think there could have been a more inclusive, inspiring, intelligent individual more suited to the job of keeping a festival creative, healthy, outward-looking and aspirational." Meurig Bowen, the previous Cheltenham Music Festival artistic director, added: " In his quiet, thoughtful, diplomatic and determined way, Graham's impact on Cheltenham's cultural scene was immense." Robert Newell, former director-general of the ROSL, described Graham as a "most humble, modest, caring, generous and delightful person, whose considerable contribution to the arts and service to the ROSL will be appreciated and remembered for very many years to come."

Graham retained his connection with the profession as a member of the Worshipful Company of Actuaries, where he served as almoner to the Charitable Trust. He was also an active participant in the 59 Club, along with his wife Eileen.

He is survived by Eileen and his daughters Elaine and Fiona, who gave him support and encouragement in all his endeavours. His delightful and stimulating company will be missed by his multitude of friends.