The UK is the 13th best country in the OECD for female economic empowerment after climbing one position in an annual ranking by PricewaterhouseCoopers (PwC). 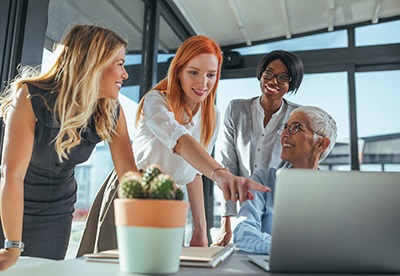 Iceland tops the Women in Work Index for the representation and welfare of women at work, with Sweden, New Zealand, Slovenia and Norway completing the top five.

The findings come as the world celebrates International Women's Day, with PwC warning that countries are missing out on billions of pounds by failing to boost female employment.

It estimates that the UK could increase GDP by £178bn if it matched Sweden's female employment rate of 69%, and would raise women's earnings by 20% by closing the gender pay gap.

"It's encouraging to see the UK making progress. Mandatory pay gap reporting has shone a spotlight on the issue, with gender equality now a real priority for business leaders."

The findings also show that the UK is second in the G7 for female economic empowerment, just behind Canada, but ahead of Germany, France and the US.

Korea, Mexico, Greece, Chile and Italy are among the worst performers of the 33 countries studied, while the US, France and Germany languish in 23rd, 22nd, and 18th place respectively.

But the analysis shows it is China and India that have most to gain, with these two countries accounting for more than a third of the global female workforce.

In India, increasing female employment rates to the same level as Sweden would generate a $7trn (£5.3trn) boost to GDP, which is equivalent to around 79% of the country's GDP.

While China could increase women's earnings by a collective $2trn if it closed its 25% gender pay gap.

"Employers can help by supporting women returning to the workplace and creating a culture where ambition and progression is encouraged at all levels," Hinton continued.

"It's also important to remember that policies such as flexible working need to benefit men just as much as women.

"This will help balance some caring responsibilities traditionally held by women and, over time, should increase the number of women who enter - and stay - in the workforce."

This article appeared in our March 2019 issue of The Actuary.
Click here to view this issue
Filed in:
03