Sir Michael Atiyah, the mathematician, former President of the Royal Society and Honorary Fellow of the Institute and Faculty of Actuaries, died in January at the age of 89. 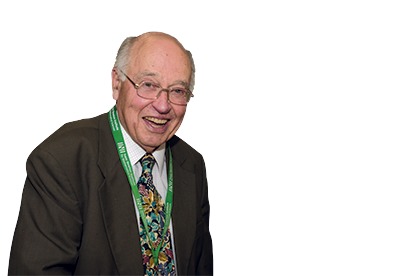 He was widely regarded as Britain's greatest living mathematician. Sir Michael made outstanding contributions to geometry and topology, and was best known for his co-development of a branch of mathematics called topological K-theory and the Atiyah-Singer index theorem.

Sir Michael was born in London to a Lebanese father and a Scottish mother. He was first educated in Egypt, before going to Manchester Grammar School. From there, he gained a place to study mathematics at Trinity College, Cambridge, where he remained for his PhD. In 1955, the year he gained his PhD, he married Lily Brown, a young Edinburgh mathematics graduate who had gone up to Cambridge to do her own PhD.

Sir Michael's early career was spent as a professor at Princeton. In 1983, he returned to the UK to take up a Royal Society Research Professorship at Oxford. In 1990 he became Master of Trinity College, director of the Isaac Newton Institute and president of the Royal Society.

Sir Michael's work united several preceding theories and opened up many new areas of study. The power to connect previously unrelated fields was a recurring theme in his work. He linked not just different areas of mathematics, but deep connections between mathematics and physics - for example, in his later years his work encompassed the theories of super-symmetry and super-gravity and the string theory of fundamental particles.

During his career, his outstanding ability as a mathematician was recognised with some of the highest honours in mathematics. In 1966, Sir Michael was awarded the Fields Medal (the Fields Medal being to mathematics what the Nobel prize is to other areas of science). He received a knighthood in 1983, and in 1992 was awarded the Order of Merit - the UK's highest award, restricted to just 24 individuals at any one time.

Sir Michael was elected Honorary Fellow of the Faculty of Actuaries in 1999 and delivered the final Faculty Lecture before the merger in 2009.

Sir Michael has bequeathed a rich legacy to future generations, in terms of both what he achieved and new areas of mathematics to be explored.

This article appeared in our February 2019 issue of The Actuary.
Click here to view this issue
Filed in:
02
Topics:
Careers