Rising geopolitical tension is the most urgent risk facing the world this year, a survey of nearly 1,000 business leaders, politicians and academics has found. 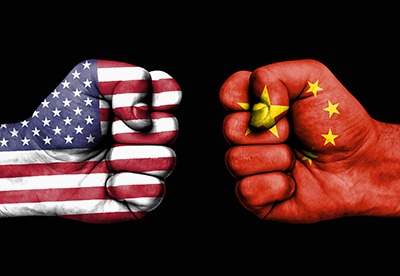 Published today in the World Economic Forum's (WEF) Global Risks Report 2019, the findings show that 90% of the experts anticipate growing economic hostility between major powers in 2019.

This has helped create a darkening outlook for the global economy, according to the report, with WEF president, Børge Brende, expecting a recession "sooner rather than later."

It has also hampered the world's ability to confront issues like climate change, with capacity to implement collective action now reaching "crisis levels".

Speaking at the report's launch this morning, Brende said: "With global trade and economic growth at risk in 2019, there is a more urgent need than ever to renew international cooperation.

"We simply do not have the gunpowder to deal with the kind of slowdown that current dynamics might lead us towards - what we need now is coordinated, concerted action."

The report comes less than a week before world leaders descend on the Swiss alpine resort of Davos to shape the global economic and political agenda at a WEF summit.

It shows that four of the top five perceived risks for this year relate to the environment, including extreme weather, water crises, climate change mitigation and adaptation, and natural disasters.

These are expected to increase the $18trn (£14trn) of infrastructure investment needed to respond to climate change and transition to a low-carbon economy by 2040.

Rapidly evolving cyber and technological threats are the most significant potential "blind spots", according to the report, with the vulnerability of networked societies still not understood.

It also highlights psychological wellbeing as both a cause and threat within the risk landscape, with 700 million people now thought to have mental health problems worldwide.

"The importance of structural changes should not distract from the human side of risks," the report adds. "Declining psychological and emotional wellbeing is a risk in itself and impacts social cohesion and politics."