Just half of natural catastrophe losses insured in 2018

There was $160bn (£125bn) worth of economic damage caused by natural disasters across the world last year, just half of which was covered by insurance. 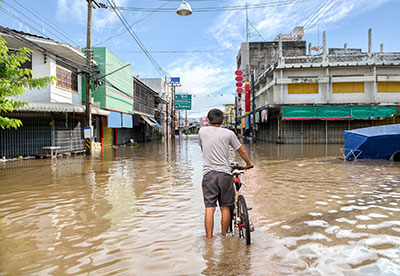 That is according to data from Munich Re, which said the $80bn of insured losses recorded in 2018 was almost double the inflation-adjusted average of $41bn over the last 30 years.

The Californian Camp Fire wildfire was the most expensive disaster, costing insurers $12.5bn, followed by Hurricane Michael, also in the US, which incurred $10bn of insured losses.

Munich Re board member, Torsten Jeworrek, said action is "urgently" needed on building codes and land use to help prevent losses, and highlighted a rising frequency in disasters.

"Insurers need to examine whether the events of 2018 were on their models' radar or whether they need to realign their risk management and underwriting strategies," he added.

Despite being one of the most costly years on record, insured losses in 2018 were significantly below the $140bn recorded over 2017.

Looking at the long-term trend, Munich Re said this finding suggests measures to protect human life are starting to take effect from a global perspective.

However, the reinsurer highlighted "clear indications" of the impact man-made climate change had on natural disasters, with last year's Californian wildfire season the worst on record.

The Camp Fire alone resulted in 86 deaths, and combined with the Woolsey Fire, burned a combined 245,000 acres of land and destroyed more than 12,000 homes and businesses.

The deadliest disaster last year was a seven-metre tsunami that hit the Indonesian city of Palu in September, destroying thousands of buildings and leaving 2,100 people dead.

Munich Re's head of climate and geosciences, Ernst Rauch, said: "Many scientists see a link between these developments and advancing climate change.

"The casualties and losses are immense - measures to prevent fires and damage are vital. Insurers also need to take account of the rising losses in their risk management and pricing."

This article appeared in our January 2019 issue of The Actuary.
Click here to view this issue
Filed in:
01