A visit to the London Mithraeum

There are many antiquities in the City of London, and some particularly fine ancient relics were on display on 20 September, when the Worshipful Company of Actuaries visited the London Mithraeum, an ancient temple to the Roman god Mithras. 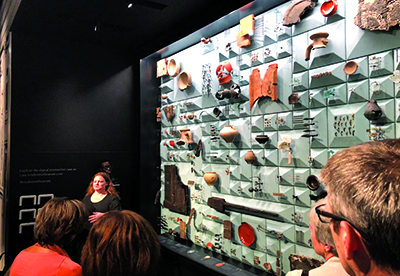 It stood on the east bank of the now-hidden Walbrook River, between what is now Cannon Street and Queen Victoria Street. Probably built in the third century AD, it was used until at least the end of the Roman era in Britain. Thereafter, it disappeared from view as ground levels rose in London, before resurfacing in 1954 during the rebuilding of the war-damaged City. Parts of the temple that were excavated were dismantled and partially rebuilt at street level, next to the then-newly constructed Bucklersbury House. Restored to its original location, visitors to the temple are treated to an evocation of the atmosphere it would have manifested 1,700 years ago.

It was hard for the 30 visitors from the Company to decide what was most interesting; the temple was well worth the visit - as were the contextual explanations given by our guide. We also learned about the work involved in the original excavation, and the reconstruction of the temple at its original location.

Finally, in the ground-level exhibition space, there is a display of 600 Roman artefacts found during the most recent excavations. The waterlogged Walbrook Valley provided ideal conditions for the preservation of organic materials, including wooden doors, shoes and other leatherware, as well as pottery, ceramics and metalwork.

Having had their fill, Company members and guests adjourned to a nearby restaurant for refreshment and conversation.

This article appeared in our December 2018 issue of The Actuary.
Click here to view this issue
Filed in
12
Also filed in
People & Social News