On a sunny Saturday in June, a group of Worshipful Company of Actuaries (WCA) members, their partners, friends and colleagues set off from Staple Inn on a sponsored charity walk, organised by Master Nick Dumbreck and senior warden Nick Salter. 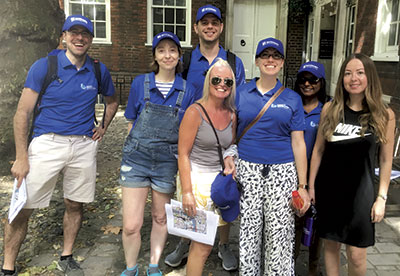 The walk was based around film and TV locations in London and included a quiz on films and series which had been filmed along the route.

The route was around 11 miles long and passed many iconic buildings and landmarks, heading south via the Millennium Bridge and through Borough Market and Waterloo before returning to Staple Inn via Westminster and Covent Garden. The proceeds of the walk are benefiting the WCA Charitable Trust, The Brain Tumour Charity, the RAF 100 Appeal and Crisis. It raised in excess of £30,000; the two Nicks are grateful to the corporate sponsors (Bupa, Phoenix, Milliman and Barnett Waddingham), as well as Petrea Simmons and her husband for setting the clues, and Keith Jones and his wife for manning the base station at Staple Inn all day.

July saw the WCA visit West Horsley, home of Grange Park Opera (GPO), for a performance of Gounod's Roméo et Juliette. The excursion was arranged by Master Nick Dumbreck after GPO founder Wasfi Kani spoke at a WCA dinner. We had superb seats in the deeply-raked stalls, and the interval meal was excellent, featuring wine from the Master's cellar. The orchestra comprised musicians from the English National Opera, ably conducted by Stephen Barlow. The chorus was magnificent, and handled Gounod's ensemble pieces well.

In other news, the WCA will be hosting a Meet the Company evening at The Bottlescrue, 33 Foster Lane, London EC2V 6HD on Tuesday 2 October 2018, at 6pm.

The WCA is a City Livery Company, formed in 1979 and open to Fellows and Associates of the Institute and Faculty of Actuaries. This is an opportunity for those within the profession who are not members to learn more about the Company and its activities. The Master and other senior liverymen will be there to answer questions over drinks and small eats. You don't need to know anyone who is a member to come along to the evening, and there is no charge for this event. If you would like to attend please email the clerk. ([email protected])