Honorary doctorate awarded by the Israel Association of Actuaries. 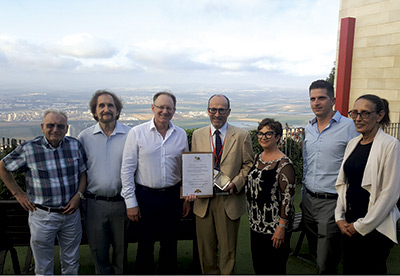 In June, professor Steven Haberman, deputy dean and professor of Actuarial Science at the Cass Business School of City University, was awarded an honorary doctorate by Haifa University, Israel, where he was instrumental in setting up the actuarial science course in 1989 and served for many years as an external examiner.

The doctorate was granted "in recognition of his academic excellence in actuarial science and statistics, which places him at the forefront of academia and research in the world; for being one of the leading researchers in the actuarial, insurance and risk management fields; for his unstinting activities in the public arena that are aimed at improving society whenever and wherever required; for his contribution to the advancement and study of actuarial research in general and the University of Haifa in particular; and for being a true friend of Israeli academia and the State of Israel."

Representatives of the Israel Association of Actuaries, many of whose members are graduates of the course and occupy senior roles in the insurance industry, attended the ceremony. Ofer Brandt, former president of the Association, and Amir Peled, chief actuary of the Capital Markets Authority, gave an award to professor Haberman in appreciation of his work.

Haberman developed one of the models frequently used today, and he continues to be involved in new research developments.