Insured losses from natural disasters fall in first half of 2018

Natural disasters cost the global insurance industry approximately $21bn (£16bn) in the first half of 2018, far less than the average of $35bn recorded over the last decade. 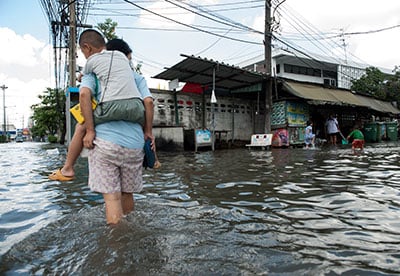 That is according to new data from insurance firm Aon, which shows that overall economic losses were $45bn, compared to the 10-year average of $124bn - a huge 64% drop.

This is despite the actual number of disasters rising from an average of 142 over the last 18 years to 156 in the first half of 2018, with the recent Greek wildfires not included in the data.

"While first half losses were lower than average, it is imperative to reiterate that this does not automatically correlate to a quieter second half," Aon meteorologist, Steve Bowen, said.

"As last year proved on multiple occasions, even one singular event can completely change the trajectory of a year from a humanitarian and financial cost perspective."

The data shows there were at least 15 separate billion-dollar natural disaster events in the first six months of this year, all of which were weather-related discounting one earthquake.

There were no 'mega catastrophes' resulting in economic damage beyond $10bn, with the first half of 2018 marked by many smaller-scale events, particularly in the Asia-Pacific.

Flooding was the deadliest peril of the first two quarters of 2018, having been responsible for at least 892 deaths.

"Identifying and understanding your individual level of risk remains an important asset in helping to mitigate potential impacts given the prospect of future events."