Each year a number of livery companies send representatives to ski for the honour of winning one or more events. 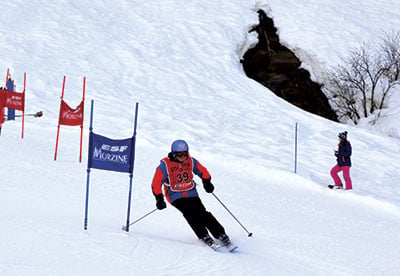 Each year a number of livery companies send representatives to ski for the honour of winning one or more events. This year, 31 companies sent a total of 195 skiers to battle it out. The competition took place in Morzine in France and the format, as usual, was a tight slalom course skied in parallel on the Thursday afternoon, followed by a giant slalom course on the Friday morning.

The Worshipful Company of Actuaries was represented by a team of 11 plucky skiers who knew they would not win the fastest skier prize (but would be happy not to retain the slowest team prize won the previous year). We have the added advantage of being the official scorers for the whole event. The Actuaries' Code, of course, prevents us from distorting results.

The team in finishing order was made up of Master-elect Nick Salter (captain), Douglas Anderson, Bill Harris, Tony Leandro, George Yoxall, Alexander Campbell, Court Assistant Julie Griffiths, Past Master Martin Miles, Court Assistant Gordon Sharp, Past Master Richard Hawkes and Andrew Vaughan. We won nothing, but it was huge fun - this is one occasion where the statement "It is the taking part that matters" is spot on!

Next year, the event will be held on 24-25 January and new members are welcome.