Insured losses from disaster events hit a record-breaking $144bn (£103bn) worldwide in 2017, yet the total economic costs were more than double this at $337bn. 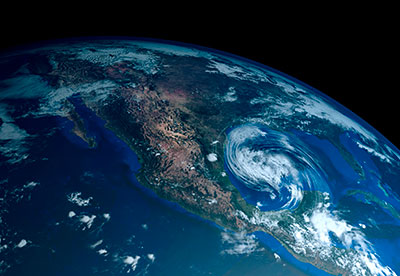 That is according to new research from Swiss Re, which highlights how a lack of insurance coverage has created a catastrophe protection gap of approximately $193bn globally.

There were 301 separate disasters recorded last year, with hurricanes Harvey, Irma and Maria accounting for $92bn of the insured losses, and £217bn of economic damages.

This makes 2017 the most expensive North Atlantic hurricane season since 2005, with Swiss Re head of catastrophe perils, Martin Bertogg, stressing the need for insurers to consider multiple hurricanes in a year.

"This is important from a risk management perspective as it will help insurers - and, ultimately society - be better prepared for similar magnitude events in the future," he said.

"After 12 years of no major hurricane making US landfall, 2017 is likely to go down as one of the most expensive North Atlantic hurricane seasons in history."

The difference between insured and uninsured losses from 1970-2017 are shown below ($bn): 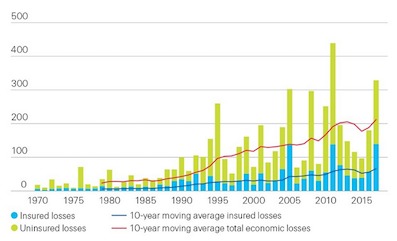 In addition to the highly damaging US and Caribbean hurricanes, 2017 was a record year for wildfires, resulting in combined insurance losses of $14bn, with Californian fires accounting for the majority of this.

This comes after analysis from Munich Re revealed that the insured losses for 2017 were almost three times more than the ten-year inflation-adjusted average of $49bn.

It was also found that just 41% of last year's natural disasters were covered by insurance, with the firm's US CEO, Tony Kuczinski, urging insurers to address the protection gap.


Sign up to our free newsletter here and receive a weekly roundup of news concerning the actuarial profession
This article appeared in our April 2018 issue of The Actuary.
Click here to view this issue
Filed in:
04